Malcolm The notational system described here aims to provide a concise way of writing down a tree of variations. For instance, one may wish to give the solution for a tsumego which has several variations. It's less easy to read than the normal go diagrams. However it seems to be a valid alternative. As well as being concise, it also seems easier to write (on SL, or in a notebook) than making several distinct diagrams.

Rather than giving a formal definition, let's give some examples.

I got this problem from the mailing list of problems by Fan Hui, organised by the FFG (Fédération Française de Go). It's supposed to be around 5D level. 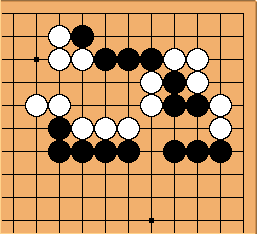 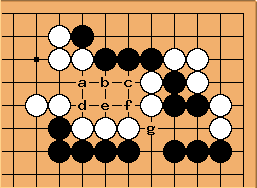 In english, one might write something like the following. It wouldn't be clear though, one would have to give two or three separate diagrams:

This gives more detail to the solution, but it's much more effort to write down! And one has to choose how many diagrams to make, in which order to present them...

This problem is from the Xuan Xuan Qi Jing problem set (Xuan xuan Qijing problem 38). I found it very tough.

Hopefully I haven't missed out any important variations or made any mistakes!

Comments here please. Also feel free to give other examples of this notation for suitable problems.

Bill: It is a nice idea. :-) Here is an SGF style notation for the first problem.

It is not as concise, but a bit more readable, I think. For comparison, with indentation:

Even more readable than SGF. :-)

Malcolm Thanks Bill. I hadn't thought of the sgf style notation. I agree that well-chosen indentation makes it easier to read. Which style notation do you prefer?

fractic: It's going to be a bit hard for under the stones play. At least on SL. And you don't get the instant recognition like with a diagram. But it could work pretty well in print actually.

Also I can't find the m in the second example should it be d perhaps?

Malcolm Yes, I don't know why I typed "m". I guess my brain wasn't functioning. I've corrected it, thanks. As for under the stones play, maybe one can use symbols like

as well as letters.

Gresil: Why enumerate intersections one by one using a, b, c and so forth instead of using conventional board coordinates? Isn't it just an unnecessary symbol layer? Eg. in the second diagram A could just be called M16, B N16 etc.

Malcolm: Perhaps so. I think it's a matter of taste. Personally I find it hard to get my head around the usual coordinates. And a, b, c is more concise than M16, M15, M14,...

On this topic, this reminds me, I hope to make a page about Audouard coordinates soon.

Dan: I like this very much. One technique that has helped my chess tactics a lot is to do difficult problems and write down all the variations I can calculate. Writing down the variations is "cheating" a bit compared to actually solving problems at the board, but it enforces a little rigor in my thinking process that I can then try to emulate during a real game. This notation (perhaps combined with Audouard coordinates, which I also like a great deal) could make it possible for me to do the same thing with go problems. I'll give it a shot.