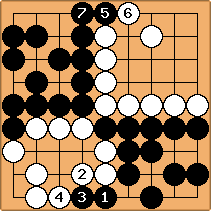 fractic: The trick is that black can play 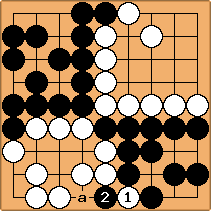 white can't play at a because of the strange ko rule. Now it get's a little tricky. If white plays anywhere on the board (note white has no ko threats) black can play at a himself repeating the whole ordeal. So white will pass.

Under normal rules black can't prevent white from playing at a so he'll lose by one point.

[1] Bill: However, area rules where passes lift ko bans, such as Ing rules and Spight rules, have other rules that do not allow such endless repetition.

fractic: Of course but those rules are part of their ko-rules. The way the colourblind ko rule is written on the parent page implies that passes don't lift the ko ban. Of course banning such repetitions would make sense for actual play. The problem was just intended to show that the colourblind ko rule could make a difference in the result of a game. (And I think black 3 is a nice move).

Bill: Yes, it is nice, and the problem is very clever, as well.

Also, the rule does imply that passes do not lift the ko ban. So why even mention the possibility? :)