For a player's string, local-2 is local-1 and, recursively, any adjacent intersection without a stone of a string that is of the player and either uncapturable or capturable-1.

A player's string is capturable-2 if

More formal versions of the definitions are in the Japanese 2003 Rules. The concepts local-2 and capturable-2, and the following example, have been discovered by Robert Jasiek.

Examples are rare but here is an example: 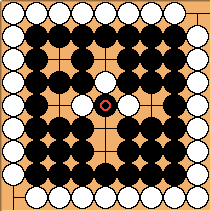 The marked stone is capturable-2. 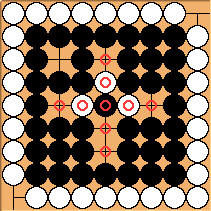 This is the local-2 environment of the marked black stone. 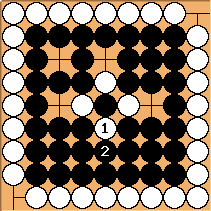 The stone 2 is a local-2 permanent-stone. This proves that the original marked black stone is capturable-2 so alive.