Bulky Eight in the Corner 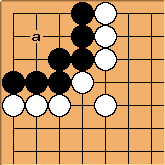 This is the basic bulky eight in the corner. a is the vital point. If black plays there, he is alive with 7 points in the corner.

If white plays a, he can achieve either ko or seki, but cannot kill outright. Optimal play depends upon the ko threat situation.

This position is proof against the idea that an eight point eye in the corner without cutting points is alive. 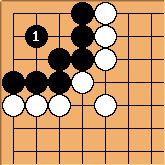 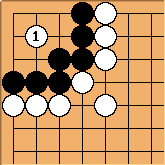 Next we shall show play when White plays first and discuss which choices white should make depending on who is komaster.

the temperature drops, which means black can choose to play elsewhere. Next White could kill Black, but White typically does better to wait. Giving black two moves elsewhere in exchange for this corner is usually not good enough. Either Black or White will then come back to this position later in the game, when it is big enough. 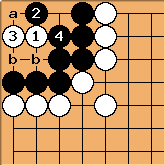 threatens to kill, as does

White can play a to create a 10,000 year ko, and if White doesn't then Black can play either b to make seki. If black is komaster, white should leave the position as seki. 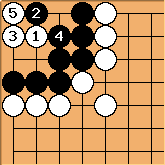 , the position is a ten thousand year ko. Black will often start the ko immediately, and may choose to lose it in exchange for a play elsewhere. This is usually better than waiting until the end of the game, when White can often win the ko for free. 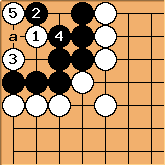 This way, white gets a direct ko for the life of the black group. This line of play is usually not best for White, normally a is better than

Can black avoid the direct ko and make seki? 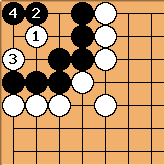 here is a trick play. The idea behind this move is that White might make a mistake with

and settle for a seki, as shown in the following two diagrams. 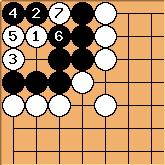 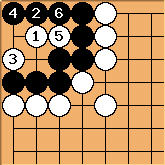 But White can play better-- the following line kills the Black group. Hence, Black has to settle for the direct two stage ko. 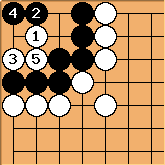 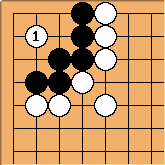 What happens if black is missing a descent? In this case, Black is dead... 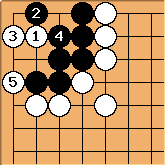 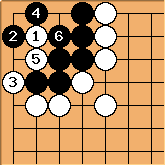 And black playing on the other side is no better. (Black has a shortage of liberties and cannot play at 6.)