This position is from a few moves later in the game that appears in Beginner Move Function Problem 4. Match the numbered idea with the lettered move. 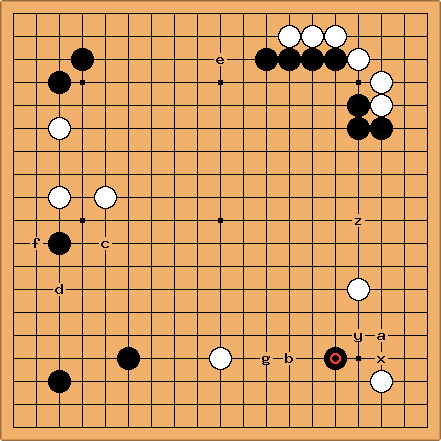 2. Link stones before they become isolated. a

3. Attack Black stone within White sphere of influence. b

4. Get a foothold near Black thickness. e

b looks best to me. Obsoletes a, certainly. d looks suicidal. e looks dull. Against c, black can extend from the bottom left stone, and black threatens to take more territory on the bottom than white threatened on the left.

5 kyu analysis:d is ok because white can run out, or cross under at f. b is good because it prevents a move by black at g, which would make the white stone on the lower side lonely. We could say that white a is bad because it induces black g.

I do not like b and would prefer a. It makes a 100% save group facing blacks upper thickness. If black answers a with g, its group still is not save and w lower hoshi stone is not in real danger. White b induces black to split the white 3-3 from whites other stone on the right, forcing the latter to seek life in front of blacks thickness.

zinger: I feel that the threat of black x, separating white's stones, dominates all other concerns. I can only assume that

was the last move. Anyway, I think white must play y (better than a in my opinion) to prevent this.

togo: I think b is good: It might induce Black splitting at a (or x), but that again would induce White playing at z, the move White wanted to play all along. Also the bottom hoshi might not be in danger to be captured right away, but it certainly will be pushed around if not strengthened. The sansan, on the other hand, will easily survive splitting and continue to threaten Black's group.