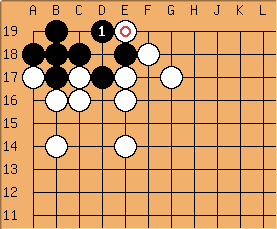 There is already an eye in the corner, but Black needs to create a second eye. The only way to make the second eye and to save the black group is to set up the ko at

Hawkeye - Could you show the continuation of the ko solution? I am a beginner and although I thought I understood the ko I still don't follow how a white play at D18 doesn't eventually take the black group. Are we to assume black can create something urgent elsewhere on the board?

unkx80: Yes and no. The point is, this is a local situation, we do not know how many of these "urgent points", known as ko threats exist on other parts of the board, and which player owns them. Please see Finding ko threats for more discussion on this matter.

Toey: I still cannot understand how black can make the second eye after white took black at E18. I cannot see how white cannot win the ko, and, thus, successfully kills black. Or does black at D19 allow himself a chance to survive?

Andre Engels: After white takes, black plays a ko threat somewhere. If white has to answer, black retakes. Now either white has to make a ko threat that black answers, or black has the chance to connect at D18, causing him to live. 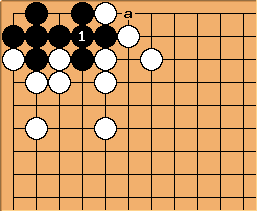 Black is not certain to live, it depends on the number and size of ko threats. But at least he has a chance to live.

zinger: Just to be thorough: in a real game, black would end the ko by capturing at a instead of playing

. After this, white cannot pervent black from playing 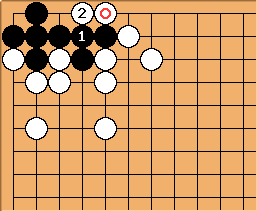 destroys the eye instead. Now Black is dead. 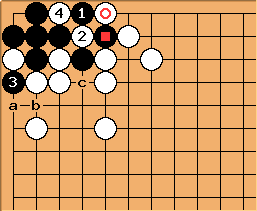 Radvendii: just clearing up for those who thought of this like me for black to localy win the ko (exuse my probably incorect jargon) if black plays

and win the ko.

ChrisSchack: I'd rather play 4 at the marked point.