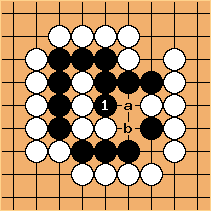 is the vital point. Now a and b are miai. 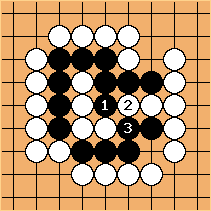 lives with a bent four. 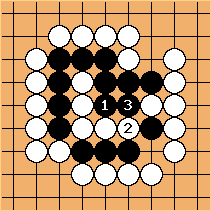 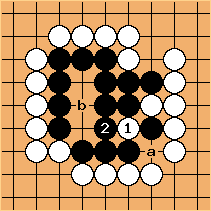 ...and if White throws in, Black captures and then a and b are miai to make two eyes. 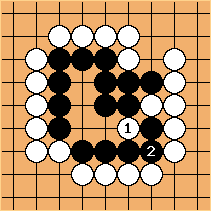 is much better, thanks!

From this last variation, it looks as though Black can only expect two points of territory[1], although of course he captures more white stones as well...? 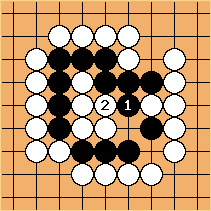 If White is allowed to play

(it really doesn't matter where Black plays first), then White almost fills with a bulky five and Black is dead. 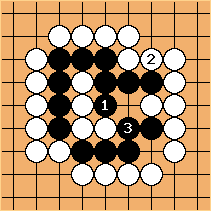 For extra credit, why is it only 3.5 points of territory and not 4?

(Why did White play

? Because we assume that the outside is White territory. 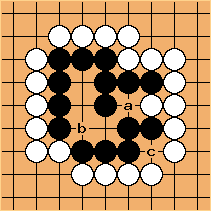 Brent: I'm still not sure about miai counting, fractional points, etc. But I'm guessing the answer is that a play at a is worth one point in gote, hence 0.5 in miai counting. (right?) If Black at a, then Black has one connected group surrounding a bent four -- hence four points. If White at a, then Black will eventually have to defend at b (probably after White c which is now sente), and Black only gets 3 points.

Is this at all correct? Even if it is, did I describe it correctly? Please teach me... (=

unkx80: For me I will accept this, but I will leave it to the endgame expert to have the final say... LoL. =P 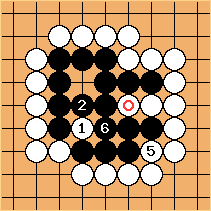 , he will have 4 points, while if White plays there, Black will have only 3 points. After

, Black will either have to protect with

, or White has two ko threats with

Since this is a gote position, we count Black's territory as the average, 3.5 points.

Brent: I get it, thanks!