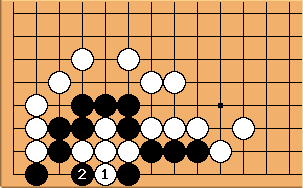 demetria: I think a ko can settle the issue. White probably made a stupid move but can still fight. If white makes the ko threat then black has to answer inside his own territory. Black can still be destroyed if white takes the vital point after the ko threat and capture. 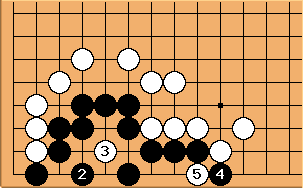 Black tries to make the best of it but gets only one eye.

lavalyn: Above is too lax. Black lives. 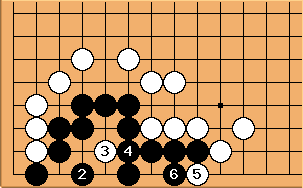 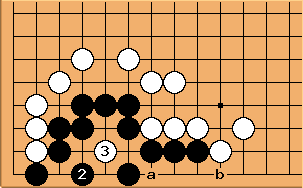 demetria: In that case, should white throw in at A instead and the perhaps seal black off at B (after black responds of course)? 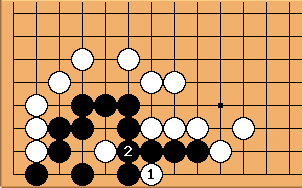 demetria: Hmm. I don't actually see a way to prevent black from making an eye at

, but maybe white can threaten a capture. 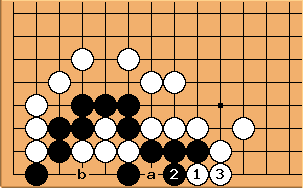 This puts black in atari. But could it work?

unkx80: You are almost there. But

definitely should have been at a. How about 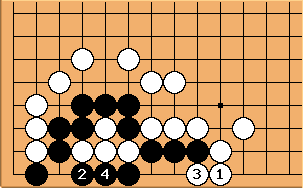 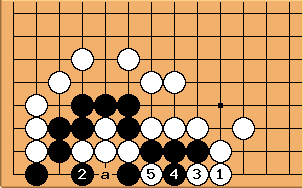 demetria: I don't know if black would respond this way, but it seems like he might (well, if he were as stupid as me).

Oops! I misread above and didn't put 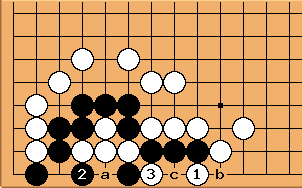 At this point I don't know if black would respond at A or B. Black can capture at A and then again at C, but C first is a loss for black. After black captures at A, then white can take the vital point of the four shape. If black responds to white by capturing at C then white can put black into atari again. Would black be more likely to respond that way or to first secure the eye at the vital point?

Hmm. I'm actually starting to think this might be more successful if white played 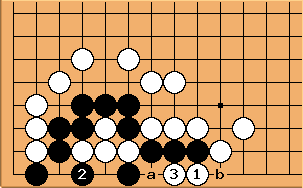 This way, when black captures

, then white can create a false eye, and when black captures white's farmer's hat (which I suppose has to be his first move in this scenario), then white can take the vital point, killing the entire group. Black can't play

because then white would capture his group of stones. He can't play

at A either, because that would still leave him with a false eye. I think it works, but please show me if this has a critical flaw.

demetria: I'm glad I finally got it, but what was all that business of telling me

should definitely be a A?