This is a situation from a real game which Bashan (17k) lost against rmhenne (16k) because he couldn't kill the white group. It looks like a good exercise: 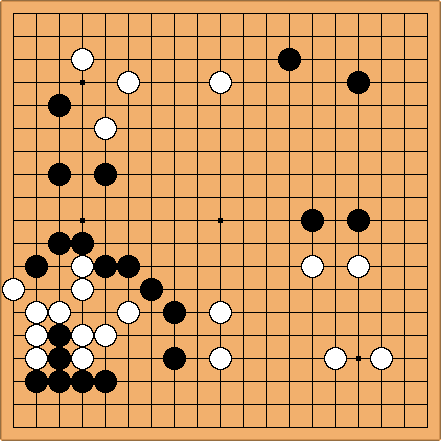 Here's the solution I could come up with after the game. Not sure if it is watertight, though: 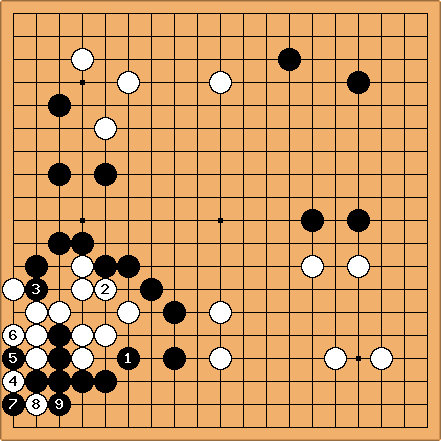 SnotNose: I believe this is incorrect, due to reasons explained in the next diagram.

is not a vital point.

are, however. White could have lived with 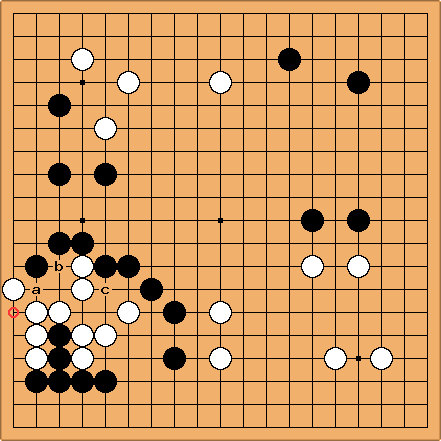 SnotNose: Before jumping into killing sequences, it is important to locate all the ways White can get eyes. First note that if White plays a, she gets an eye at the marked point. Then, there are two ways for White to get another eye: by playing b or c. So, it would follow that Black need only take one of the points a, b, or c to kill White. Indeed, this seems to be true (to me). Variations omitted. 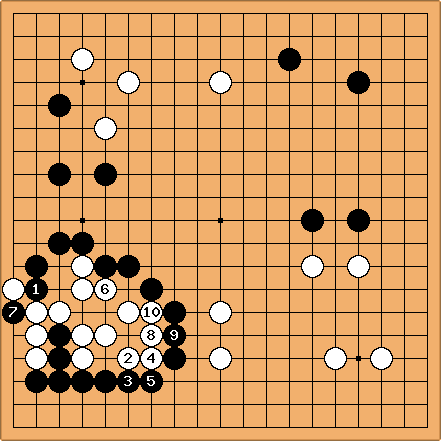 (Sebastian:) Funny you should say so.

was actually what I played in the original game - but I didn't succeed. Only now do I realize that

SnotNose: But, having made the error with

, you should have been pleased with

, a slow and unnecessary move that gives Black a big opportunity. Despite not killing White, Black is in an even better position than he was before this sequence was played. So the game is still quite winnable for Black. 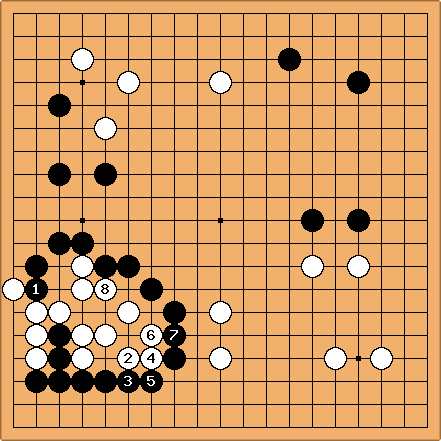 unkx80: White can live with

. I do not see a way to kill, or at least an easy sequence. 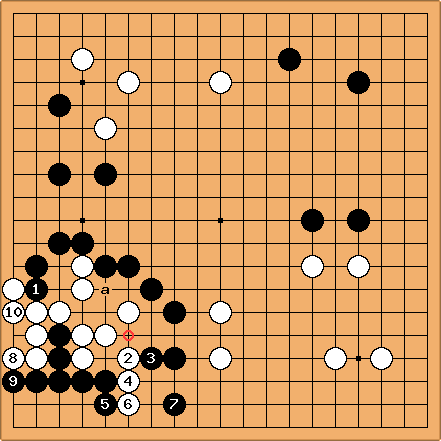 steals the eye at the marked point. With

, White tries to kill the corner, but I do not think she can. White gets an eye with

but Black has sente and can steal the last eye with a.

Can White do something better? The only option would be something else with

I think. I cannot find an eye-making move so I think White is dead. Any other ideas? 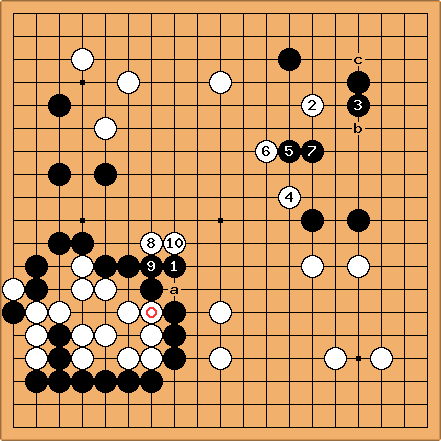 SnotNose: [Y]ou should have been pleased with

, a slow and unnecessary move that gives Black a big opportunity. Despite not killing White, Black is in an even better position than he was before this sequence was played. So the game is still quite winnable for Black.

(Sebastian:) I felt like I needed to protect, and of course

should have been rather at a. Anyway, this gave White sente to invade the NE moyo with

rather than b because I thought it would make it harder to invade the corner. Now I'm thinking c would have better served this purpose. At the time I was thinking that this is not the ideal extension, but I now think it is, given that

serves no purpose so you had yet another chance to tenuki. (That is, a White play at

doesn't cut anything so

isn't protecting anything--it is as good as a pass.) Anyway,

wasn't very big. See next diagram for my suggestion. 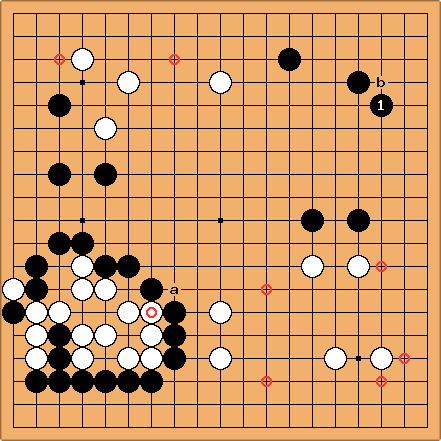 SnotNose: The cut at a is not to be worried about. Black is strong and on both sides and can handle the cut easily. To lose anything, Black would have to allow White at least two moves around a, even then, Black's loss would not be too great.

Black is ahead in influence and, with his next move at

or b, can be far ahead in secure territory as well. All of White's positions can be invaded and reduced so they're not as big as they look. (Possible invasion/reduction points/areas to consider are marked.) Black is in a good position this way.

More generally, it should be clear that Black's position is good. Look at the relative efficiency of stones in the lower left. White's are shut in and surround three points. Black's face outward and surround much more territory and exert much more influence. Black should be very satisfied here.

Thus, one can't fault Black's opening too much. White has been outplayed. Black lost the game later.

(Sebastian:) It appears my biggest problem is the opening, and if it really wasn't possible to kill the white stones in the SW center then it indicates that I made my moyo too wide. Here are the first 20 moves. I'd be happy about any comments, especially those that say "read Otake's book on openings", because I'm expecting it in the mail any day. ;-) 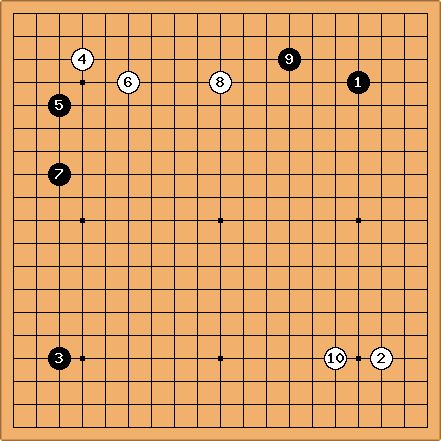 kokiri: Otake's book is a pretty good primer on the opening. Here's my low kyu 2 pence worth:

face each other and it is generally said to convey an advantage to whichever player plays an approach move first.

From that, it might be better to approach the bottom right not the top left with

, but really that's splitting hairs a bit. However, I feel that

as a unit feel a bit low as they're all on the third line.

What is the idea behind

? Limiting the white top left position doesn't seem that important. I'd approach at 10 instead.

(s:) The idea behind

was to serve two purposes: Limiting white and increase the life chances for

None of this is really big, however. 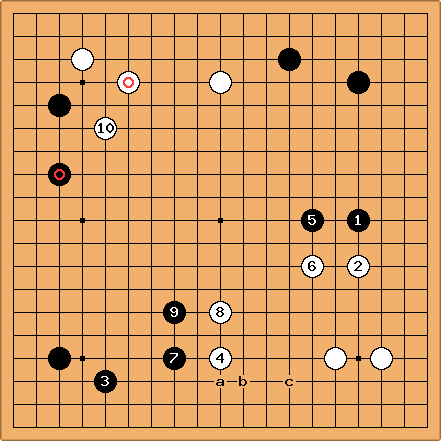 so you still have sente. After

, Black needs another move to secure the corner, and another on the side before thinking about any territory down the side, so it's probably right to play elsewhere.

which is a good move locally, but something about it doesn't feel right. Perhaps the lowness of

and the position of

reduce it's value, I'm not sure - I'm getting into hand waving territory here.

One thing for certain though - it permits

which makes the bottom right start to look big. Rather than make a moyo with

and the bottom left stone are quite loose, I would think about playing at 4, or maybe a, which limits white's expansion whilst building a big, loose, 'sphere of influence' rather than a moyo per se. Then white will have to approach the bottom left and you should be able to put some pressure on whilst taking territory.

(s:) Interesting - there seems to be a time for shimari, and a time for sphere of influence. I just played the shimari by intuition, because I felt I needed some security.

Jesse: I don't think Black should play at 4 or a. The reason is that those plays are not in an ideal relation with either Black's 3-4 stone or White's shimari. Black b and c are standard ways of approaching the ikken shimari, while only moves to the left of

Jesse: Anyone know what should be played instead? This kind of situation is very common.

kokiri continued This is far from a lost game however, white's bottom right is big, but especially in the diagram 53-62 where you have built up strength across the bottom, you will have chances to invade if you need to.

One comment however: having to kill a group to win is usually a last option, unless your opponent makes a really stupid invasion. It's a hard thing to do and if you fail you often leave yourself with a lot of weak spots. Rather it's better to seek to build strength or territory whilst attacking a weak group. In the top diagram you've built about 16 points above the white group in the bottom left, and the same below it whilst allowing white at most five points. That's not really a failure - it gives you a base from which to consider how much you need to reduce the white moyo by.

(s:) There's one more thing that bothers me about invasions, beside the fact that they normally succeed: I usually end up in gote, as in "Moves 53 to 62" above. Is this something that just comes with practice, or is there a trick to getting sente?

(s:) Thanks to everyone who replied here - this was like casting a brick to attract a gem. I prefer this to the Go Teaching Ladder, because we have a dialogue here and it serves other interested beginners. At least I think so. Is it OK if I put more lost games here?

SnotNose: I think SL is better suited to discussions of positions and short sequences that precede or follow. For large portions of a game, a commented SGF is far better (IMHO). The position you asked about in this game was a very good one to learn from. It had to do with L&D but, more importantly, with the evaluation of the whole board and the recognition of the severity (or lack thereof) of a cut. As it turns out, the L&D aspect was the least important. White already had a losing position.

[1] What ought Black do with his next move? JesseM? makes some good points and I am finding it hard to produced ideal relations among stones played. Some thoughts below. Nothing definitive. 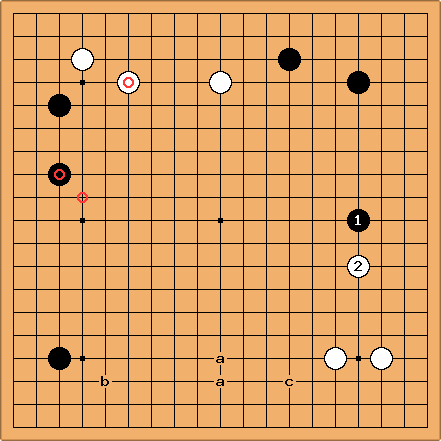 SnotNose: The direction of a is biggest. Perhaps the question is what exact point. Black played b. The relation between the lower left enclosure with b and

is less than ideal. Black would prefer to have

at the marked point.

If Black does play one of the a points then c is a nice follow-up, so good, in fact, that White may wish to forestall it, yielding... 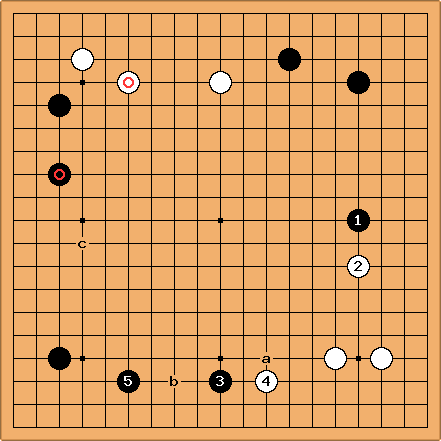 SnotNose: This way has Black developing on larger scale than White. There are lots of places for invasion by both sides. Black may consider attaching at a before playing

to protect the invasion point of b. c is now a big point for Black. White seems too cramped in the lower right.

(Sebastian:) Is it not a problem that this is gote for Black? Now White happily will invade around c, which will be more promising as there are less black stones around than in the real game when he invaded.

SnotNose: First off, I can't defend my suggestions too strongly, as I'm not 100% satisfied with them myself. For the moment, let's suppose the game went as I proposed. White has the initiative. Suppose White plays at or around c. What might Black's plan be?

Were I playing Black, I would attack White in such a way to consolidate the lower left corner area (i.e., turn it into real territory) and/or strengthen Black's two stones in the upper left. It would be essential for Black to end in sente. Then I would reassess and either aim at one of White's weak points or simply acquire more secure territory. The game seems very promising for Black (this one and the original). White seems to have developed too slowly.

SnotNose: Another thought occurred to me while looking over this page. In both the real game and in my alternative, moyos are surprisingly large, considering a diagonal fuseki. With the second move of the game, White permitted the option of a diagonal fuseki. With the third move, Black accepted. Yet both then went on to build moyos. If a moyo game is what one is after, a parallel fuseki is better suited, as it allows adjacent corners to work together in a unified framework. So, perhaps one reason I find stones not working together well after the tenth move or so is that the class of fuseki (diagonal) is not well-matched to the style (moyo). Put another way, more approach moves and fewer enclosures might have yielded more efficient use of stones. This would suggest, perhaps, that Black's ninth move should have been at or around White's tenth. Or, that White's move eight was slow, and should have been an approach to the lower left. Perhaps also, Black's third move should have been on the lower left 4-4, giving a faster development that would have worked well with an approach in either direction. This is vague but about as far as I can take it.