Ok, so this site has a terrific bunch of pages on KoFighting.

The only thing missing is, maybe, the super-simple-please-don't-swallow-the-stones explanation of ko fights.

No, really. You know the ko rule right? You can't recapture stones immediately if it results in the same board position, you have to wait a turn. Yeah, there's a bunch of subtle rule issues, and super ko and mega ko, but 99.9% of the time it just means this:

So, White cannot recapture. She (heh, so PC!) must play elsewhere. On Black's (stones of color?) turn, he may either

Now this is the super-simple beginner part. You know how you view the go board as collections of shapes that you can modify with one stone, then the opponent, and so on? When you look at it in terms of getting two consecutive moves, everything changes. 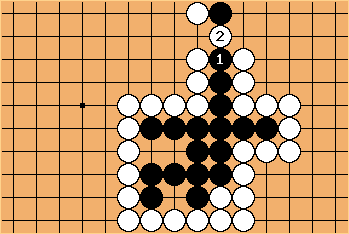 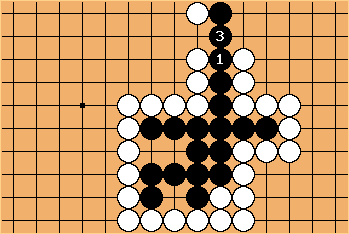 This is why you should not play out fights you are losing. Maybe something else will happen later, maybe a ko fight will occur and you can use winning the old lost fight as a threat.

Here's the difficult part: you must be able to estimate values. First and foremost, estimate the value of either of you winning the ko. Secondly, you must understand all the values of your potential ko threats, as well as your opponents.

If you know all this, or can at least hazard a guess, you are prepared for your first embarrassingly awkward ko fight, where you slap at each other in a dainty, fopish manner.

If you take a ko, and the opponent plays a ko threat (he placed a stone that would be damaging if not answered), you must evaluate if the ko threat is worth more or less than the threat. If it's less, answer the threat. If not, fill in the ko.

In my first real ko fight (

Amateur Ko Wrestling), my opponent and I, both presumably dimly aware of ko fights, proceeded to make and answer threats for a worthless ko (lowest worth is like, I dunno, two points?). Just kept passing it back and forth like a soccerball between people who just learned how to play croquet.

If winning the ko doesn't mean the life-and-death of a group, or cutting/not-cutting some major connection, it isn't worth spending time on -- play elsewhere.

If a valuable ko is in play, make a threat. You'll either get a chance at getting and filling the ko (the opponent may make there own threat), or you get to follow through on your threat, possible with big gains.

Now, there's a lot of subtleties in ko fighting! For one thing, deciding on what threat to make is not straightforward, even if you could value them properly. You basically want to use the smallest threat that is bigger than the ko.

If you want to know more, check your local library.

After you tell them what 'go' is, and they tell you they don't carry any books on Othello, you can go check KoFighting, and stop WASTING YOUR TIME here.

Really, what's wrong with you?