Chtito: I have a question about an approaching sequence that I don't understand: [200] 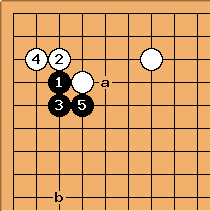 , the sequence White a, Black b is played. Now my question is: why White does not play b instead of a? How would Black punish a white play at b? 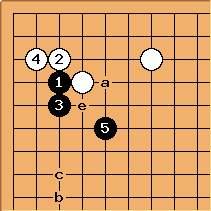 Then c, not b (too wide) would be played.
White replies at a (honte), not e (if s.o could link the apprpriate diagrams to here, they must be already on Senseis).

fractic: I've also got a question about this. What happens if black plays

as above and white doesn't play honte at a? A black cut leads nowhere and a peep leads to something like 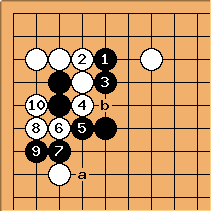 fractic: with black 11 at a. But now white can push trough at b so I don't think it's that good for black. 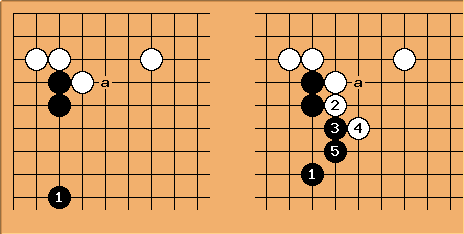 your question - how to punish?

tderz: On the right (with the usual extension

), White would simply punish by pressing black down while building influence herself.
Your question (the left side) is more difficult to answer.
If White proceeds as on the right, then Black gained a bit (in comparision to the right dia) because the extension is one wider. 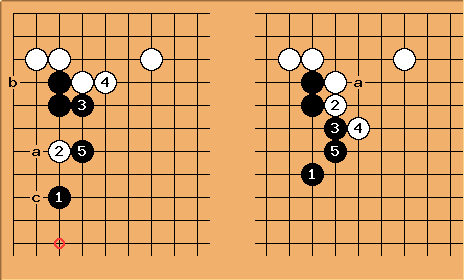 your question - how to punish?

is confusing, it depends a lot on the neighbouring stones. The exchange

itself is bad for Black (cf. pushing on the 4th line?).
If there is one white stone below

, then
White could descend with a, threaten connections b and c as miai.

Hence, I think the invasion

is feasible, because Black has to commit the unfavourable puush on the 4th line. 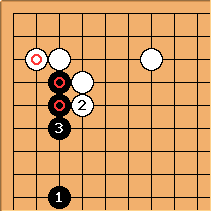 is simple and effective. After 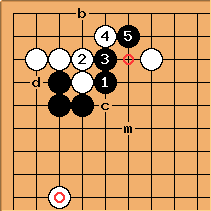 it becomes very dangerous for White. After

can White cut at the marked point? I don't believe so. In any case White was strong here first, so that White shouldn't have to fight in such a desperate way: it should be Black's problem to find good moves, and here it is White's.

is quite bad, while

is possible but not really interesting.

tderz: White protects at b after

, then White cuts at c and is much better off. Due to the presence of

, blacks 3 stones have to fight in an unfavourable environment and will dammage

(which were bad style).
It is true that black d is sente against the corner, but that won't help so much.

could have been played around m (connecting own stones - ladder works to the left - and threatening all the rest).