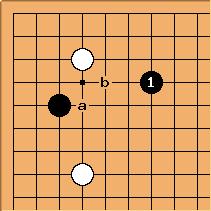 This big jump of

, as an answer to the 3-4 point low approach two-space high pincer, is a move between a counter pincer and a pressing move. In most professional games, a is played to cut and connect on a large scale. Sometimes b is played.

Until further notice, the following analysis was performed at 2d amateur level. 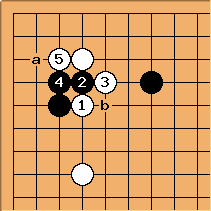 There is hardly any variation up to

. Black continues with a or b, but let's first investigate 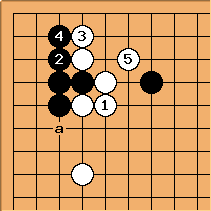 It seems Black can live with many points in sente. White's influence is not great. Also, White a next will not end in sente either. Probably this is too soft on Black. 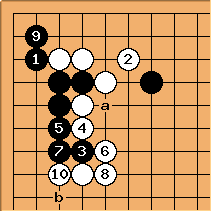 This is the most common variation. White takes grand influence, while Black takes ample corner territory, sente and aji at a. Incidentally,

is not at b because

will be sente. The loss of corner territory and aji does not outweigh the negated influence. 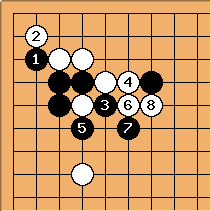 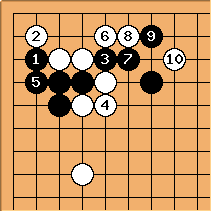 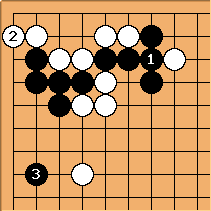 In this third variation, Black establishes a position on both sides in gote. White has some influence in the centre. 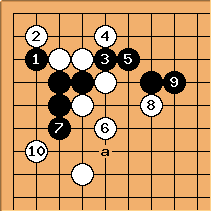 to protect the cut at a and then the remarkable 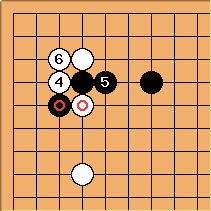 The only way to capture

directly is a ladder. If the ladder doesn't work for Black,

is an option. As with other ladder dependent sequences the result depends very much on how effectively the aji of 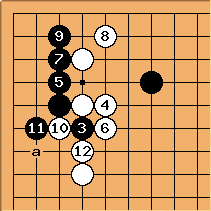 is played at a. This is a more peaceful variation, with Black taking corner territory in gote. It seems like White's influence is too powerful now, so perhaps this variation is only used when it cannot be put to use. 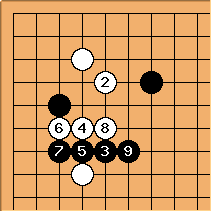 In this variation, the idea is for Black to hurt the pincer stone and build large scale influence. Other answers than

need to be explored still.