Hata wo motsu ('hold the flag'; develop towards the center to stabilize a group) - 旗を持つ

I've heard Chinese has a similar phrase translated as "raise a flag" which I understand as meaning when you have e.g. 2 stones forming a one-dimensional line adding 2 more stones offset to create a two-dimensional box shape in the centre, which creates valuable eyespace and prevents you getting peeped to an eyeless stick (I imagine the name comes from the process of a one-dimensional shape becoming a two-dimensional one being flag unfurling from the flag pole). Is this the same meaning? (I think it's a valuable concept I've only become aware of and appreciated recently).

John F. The go meaning you attach is correct but it's more like "hold out the flag" (full face) rather than raising it (which would be ageru) and it is certainly nothing like the "Flag over Iwojima" image. It may be worth recalling that old Japanese flags tended to be vertical rather than horizontal, but on the go board the resulting shape tends to be square.

It's a known technical concept but some people prefer to call it "hana wo motsu" (hold out a flower, as if spreading the petals), which perhaps expresses the usual (and smallish) shape more reliably.

It is not intended to mean just making a squarish shape for shape's sake but its creation is often allied with forcing moves and choshi (momentum-making) moves, so that only the last move will be gote, though with a strong touch of gote no sente - as you say, it is also a developing move.

I wonder if I can find some examples:

- Moves 33 (Michael Redmond praised in his review) and 43 here from AlphaGo make a 2d box shape creating eyespace, but also have attacking meaning on the white group to the right:

- A move I almost played (and regretted not doing so, chose c instead) from one of my 4d amateur games, it's more of a triangular than square 'flag' at the moment, but if I can get the a-b exchange (maybe black hanes) it is more boxy. 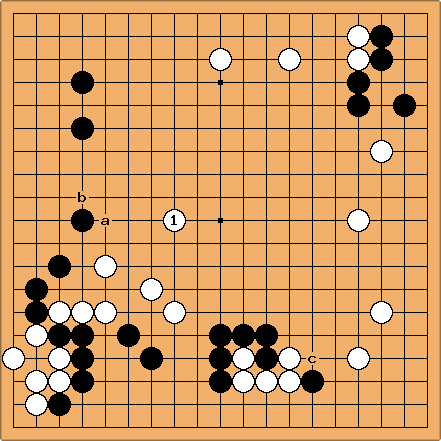 White 1 plus the marked stones makes a nice little flag of eyespace and means annoying shape attacks like a are no longer a worry. 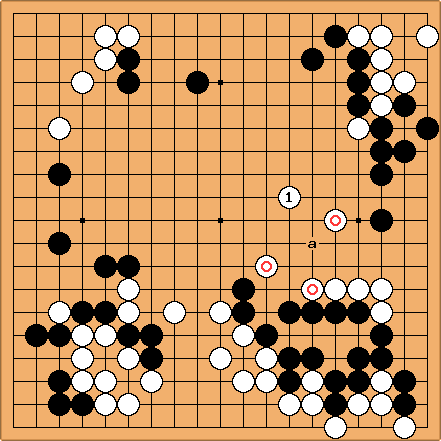