What is the best possible outcome for Black? 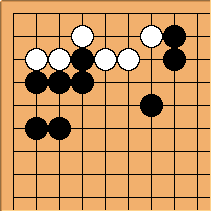 I think the B 18 clamp kills

Thanks! I think you are right. I did not find that move in my actual game. -Dent 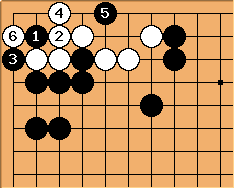 This looks like white lives, but is 5 necessary to kill? If black connects in the corner with 5, can white make two eyes on the right? I would guess that maybe white 6 at 5 would then be alive?

In the actual game, I played 1 at 3 (hane) with the obvious response at 6, then 3 at either 4 or 5(?) I eventually killed but I am convinced white made mistakes. Both white and I were (are) low level players.

I would guess that maybe white 6 at 5 would then be alive?

Dieter: I could answer this but I think it is better for you to read it out then make a firm statement.

What happens after White's descent is indeed a cool kyu-level problem. 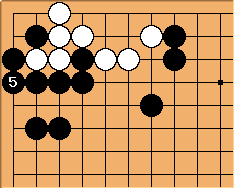 , White will be able to live on the right. 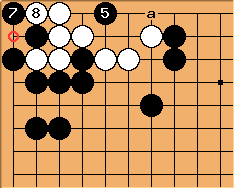 More interesting is to note that even with

, White doesn't have an eye in the corner yet : Black can fill with 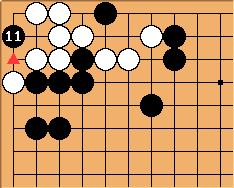 again and it's a false eye), therefore White must play at

herself to complete the eye  in gote.

Thus to live she must first complete a first eye in sente on the right. I let you figure out if that's possible ;) 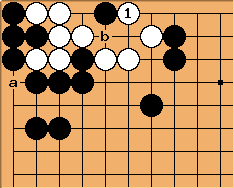 I think this lives because if 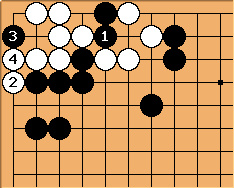 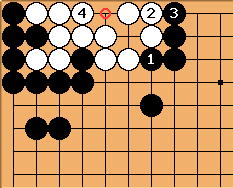 Now regarding the Hane  following the proverb Hane, Cut, Placement, the hane is usually a working killing technique. 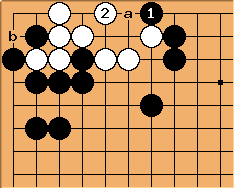 lives, because White's able to make a second eye at either a or b. 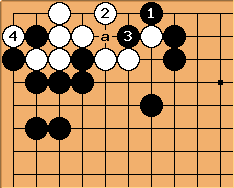 Finally, given that white's alive and the clamp is bound to be gote, I think that this is the correct endgame play. 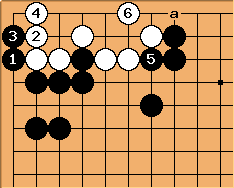 The area around a is gote for Black so White's likely to have to play there first. Then

allows to close off the middle without too much bad aji. 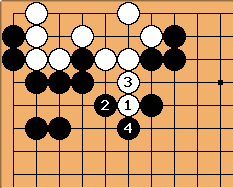 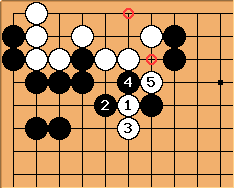 Without the marked exchange, White can create resist with

and create a lot of trouble...