Please make a greater effort to understand why something might be interesting even if it is desperately wrong, obscure, or at first reading a very mild statement. Some of the greatest sentences in history have these qualities. These examples are of plenty of interest to people interested in the mechanics of living shapes e.g. programmers, or looking for, as it were, arcana. (Specialized knowledge or detail that is mysterious to the average person:) Well within the parameters of the page - if not mysterious, strange. If not that, consider the philosophy of a wiki. Sorry if this is confrontational, but I want to spend less time defending some content that I remember taking some pleasure from.

It is a wiki, if you feel strongly about something -> edit it. A revert is the clearest possible statement of opinion, as long as people don't end up reverting back and forth everything is fine.

Thumbs up to this. A lot of the example shapes (not just on this page) need surrounding stones.

I don't know how to revert or retrieve the content in version...37? Isn't there a quick way to do that for the librarian?

See: Reviving Pages. You can indeed only revive the last version and only if you change yourself into deshi, i.e. experienced user. Then, however, you don't need outside help to do so. And you can always get by with the help of the page diff if you bother to remove "- " or "+ ".

Please explain what you take to be mysterious about the shapes I deleted (one of which tapir restored). If you're 2d, as your user profile says, you should be able to understand in a glance why some of these "arcana" might be considered unusual (all the eyes are false) whereas others are completely normal (two complete eyes).

If this shape is "arcana": 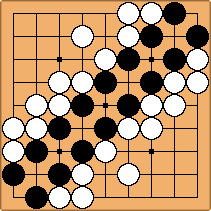 Then surely this is as well: 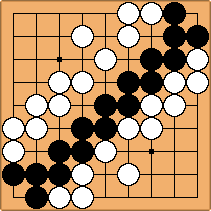 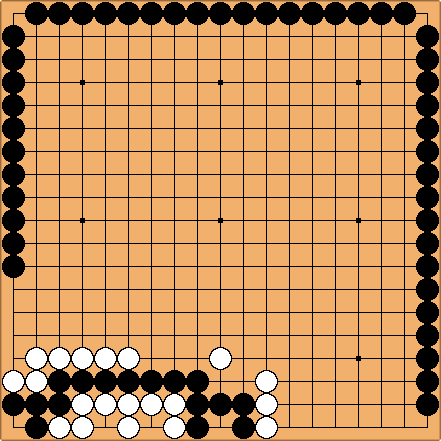 ... and many other equally stupid shapes.

I suppose it's possible that there is some technical reason why these are hard for computer-programmers to spot, but I think it's incumbent on you to explain that. Possibly we need a separate page - a programmer's bestiary of unambiguously living shapes.

All the eyes in the middle are false - the one in the corner has no additional stones but is a real eye. This isn't a surprise if you look at it with some understanding, but just by the visuals people might be surprised that similarly arranged stones produce an eye in the corner. Not sure I fancy this explanation myself, well :)

Yes, but there is one eye in each corner! It is a shape with two full eyes and a bunch of false eyes between them. You could make millions of groups like that. :)

The difference is that the living "group" is composed of multiple units. The example with four groups sharing two eyes is the best. The example with an arbitrary number of false eyes is perhaps belaboring the point.

This kind of strangeness applies to dozens and hundreds of groups, can we take a token example and add a line that people stop seeing this as strange once they learn to distinguish between groups and strings of stones?