Hey, and sorry if my question is very dumb, but why doesn't white hane at 5? (would be great if you could post a variation in which the possible results and outgoings get shown) 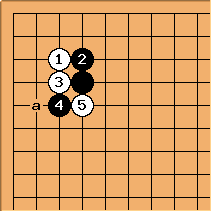 (Naturally, the top left of the diagram should be a corner)

At 5, white plays hane instead of a (which would be the normal juseki).

I played through some variations, but most of the time, white controlled the whole situation after playing 5.

Check out Unkx80's posting on this page:

This is just the answer I was looking for! Thanks a lot :-)