Is there a situation where someone might win under Chinese rules but lose in Japanese rules with the same komi?

With seki, larger differences are possible, because Chinese rules count points in seki, but Japanese rules don't. So for example: 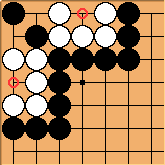 In this seki position, white will get points for both of the