I recently played a game on KGS against a bot with a mogo gtp engine, Rankbot001. I am not sure of the hardware details of this specific bot, but it seems to maintain a rank of 4 kyu on KGS.

I had a nice game against the bot which started with 5 stones handicap. Some battles took place an I managed to settle with a few groups and get some points. After 256 moves the position was as follows: 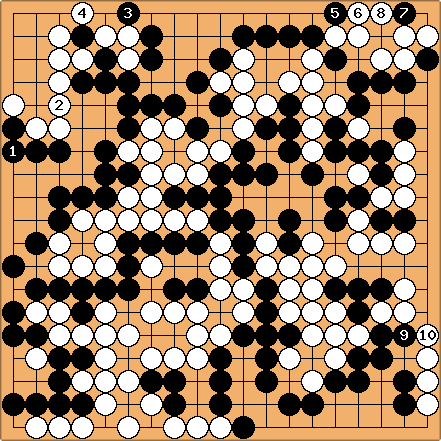 Here I had some time to count thoroughly. And I thought i was behind by a few points, but a could make up with a good end game. (Unfortunately I counted with Japanese rules while of course the game used AGA rules, but that shouldn't have mattered at that time of the game) I thought that Bg7 is now the biggest point on the board (4, maybe 5 points in gote). And also Rankbot001 proceeded to play there. However, watch the bottom left corner. Black needs two moves to make it a seki. I am not sure how many points a play at Wa4 gains or loses. However, since i was behind, and it was certainly sente, I played wa4 at some later point, followed by We1. To my joy this move was not answered by black and I got a seki there. The position after all normal plays was this: 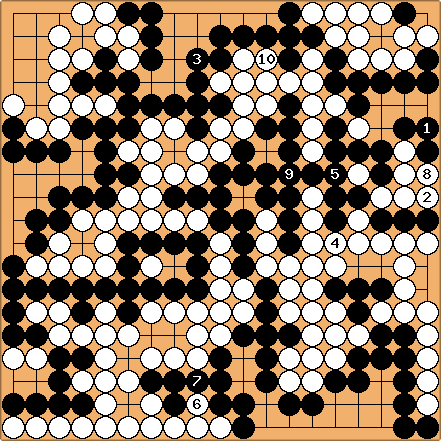 I win by 3.5 points (somehow there is now a difference between territory and area scoring, is this caused by the fact that white has the last dame point?). However, Rankbot001 does not recognize my victory and proceeds to play. He fills his own territory, as well as mine, he even fills up the entire upper left corner up to the point that he gives a selfatari and i have to capture. This goes on for 80 (!?!) moves. Finally he realizes he lost and this is the final position: 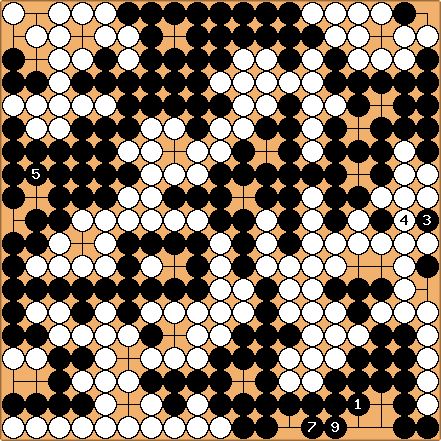 It seems to me he did not realize he allowed a seki in the lower left corner. Even more so he failed to recognize it was seki at all. I think in all the trees he calculated i would at some point play a3 or b3, which of course i would not ever do.

During the 80 moves of white passes, I ask Rankbot001 several times what his estimate of the position was and each time he gave an answer like this:

The message was different eacht time and the percentage varied from 97% to 100%, while the points varied from none to 4.5 points.

I wonder what happened here, because this is an obvious seki, I find it hard to believe that a program as advances as Mogo is not able to recognize sekis, but still that seems clearly the case.

If I load the game (

Did you take into account that the 5 handicap stones are worth 1 point each under area scoring? If this is not compensated for by komi (which it seems it was not, the SGF file gives komi as 0.5), then there will be a 5 point difference between territory and area scoring.

Also, note that at the end MoGo plays

in his own territory, allowing white the dame

. This is a clear indication that MoGo thinks it is winning and does not need those points.

I think, by the way, that MoGo is indeed not capable of recognizing seki. As far as I am aware, MoGo does not incorporate any specific go knowledge beyond how to count the game.

It shouldn't need to be able to recognize seki, as long as it can count the position and realize that pass is the best possible move at a certain point.

Herman, you would be right, if chinese scoring was applied. However the scoring is based on the AGA area scoring ruleset(see AGA rules ). In this ruleset white is compensated by one point per black handicap stone (in addition to the first one, that is). Therefore i am indeed ahead by 3.5 points.

I am not sure if this compensation is given in the komi of the game. I wonder how Mogo and KGS implement this. But in principle the idea of AGA area scoring is that the result is (more or less) the same as AGA territory scoring.

Also, my Smartgo version 2 gives a win for me by 3.5 points. (4.5 in AGA territory scoring) both in Chinese and AGA area rules. Only in ING and simple rules he gives black a win by 0.5 points.

Also, after forcing me to pass for 80 moves Mogo finally resigned, so he must have realized he was behind. Therefore I do think I am ahead.

It is amazing how difficult this discussion is, how am I supposed to count during the game if we can't figure out after the game who is ahead :P

This may also affect the other discussion thread. I lookup up the website of mogo and it only mentions that it follows chinese rules. I cannot make out of it whether he incorporates the points for half the handicap.