so i'm a beginner at igo, and a beginner friend of mine and i have been playing igo in our calculus class with that programme on the ti-89 that i said in a previous question didn't function all that great (you have to manually 'remove' each stone, there is no scoring so you have to use area scoring, etc.) anyways, he didn't want to jump immediately to a 19 x 19 goban so i first played him a 9 x 9 game (or a 13 x 13, i forget...) anyways, he prompted my resignation when he put one of my living groups in atari while i was listening to the lecture, and then handed it back to me. on my move i didn't catch what he'd done and he said 'yes' when i moved and captured the group! cheap, but anyways... next we started a 13 x 13 game and i'd like any of you to analyse this position... 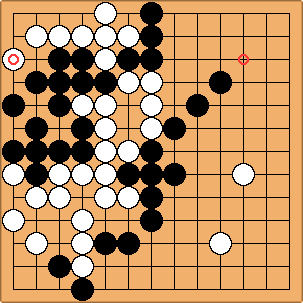 I'm in particular thinking that this move at the marked stone was a bad one, and that i instead should have done a 3-3 point invasion at the circle point. But anyways i think most of my moves haven't been too good... basically i'm wondering who's winning--i think i am but i'm not sure...

Wow, i messed up that diagramme... how do you do diagrammes on this thing? i looked at the 'how diagrammes work' page but apparently i didn't do it right...

You started all your diagram lines with a space, try editing the message and removing those spaces, and it should work.

I've cleaned it up. 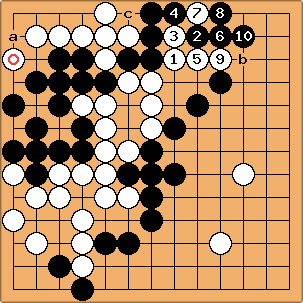 makes the corner independently alive. If you do not play there, black can kill the corner with a move at a.

White has another choice however. See diagram. White has a strong attack at the top. Black cannot play

at b, because then white can play c. 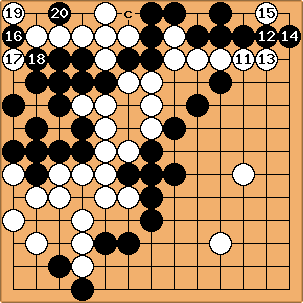 , both black and white only have one eye, but white will win the semeai, see next diagram 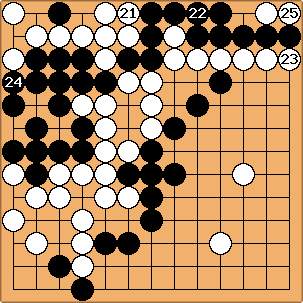 So black cannot play like this. Is there an alternative? 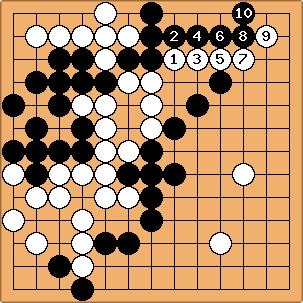 How about this move 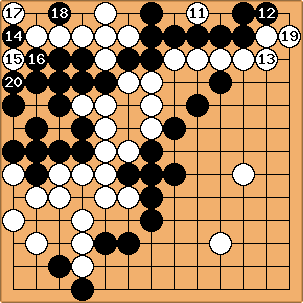 Again, both groups are dead, but... 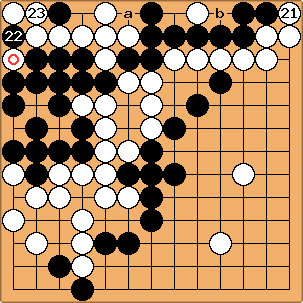 , black can either defend at

, after which white must play b for seki, or white can play atari at a, forcing white to capture at

and starting a ko for both groups at the top