I thought of a go variation where the intersections closest to the centre worth more than those farther from tengen. What do you think? 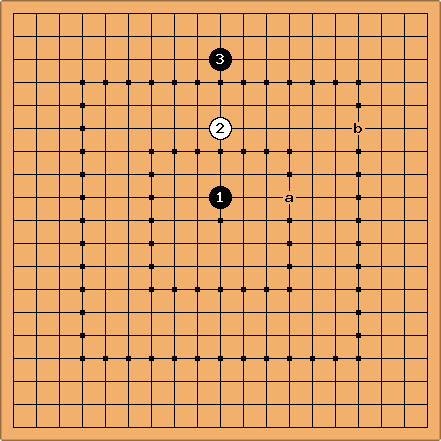 Okay, so this gives a total of :

BobWhoosta: I find the idea intriguing, however counting would be horrific and I can't fathom how it would affect the strategy!!! (Influence would definitely be worth more, but it would totally change some direction of play questions...)

Malcolm (2011-02-25): Interesting. A generalisation would be to use a value function that assigns a number(*) (a value) to each intersection. How about "irregular Go" as a name for that? It should be quite do-able to modify monte carlo computer go bots to play irregular Go; it would be interesting to see how they play on 9x9 boards for example using various simple value functions.

(*)The number doesn't have to be a positive whole number. It could be negative, or fractional, or even a number as defined in Combinatorial Game Theory... .

A small detail: it would be best here to use area scoring, so it's not just the value of territory but also the value of stones on the board that varies.

BobWhoosta: Very interesting!! I believe I could play a game or two without going completely mad... Well, assuming I'm not already mad...

Here's an interesting idea for an irregular game. The intersection of a and b (a being the x-axis and b the y-axis) would be valued at a*bmod10. This way you could have intersections valued at anywhere between 0 and 9, but the correlation between values of adjacent intersections would be very difficult to determine. It would almost look randomly valued!! (Definitely irregular).

Sadly, as opposed to the volcanic variation above (which might heavily change the play of the game) this variation might well destroy it. Also, what to do about captured stones that are on an intersection valued at a multiple (or a 0!!! (That would be a VERY light stone!!)).

SiouxDenim: On the Infinite Board page, DougRidgway proposes something similar based on a Gaussian distribution.