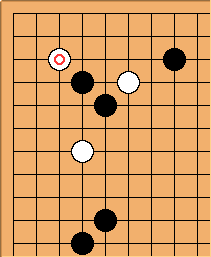 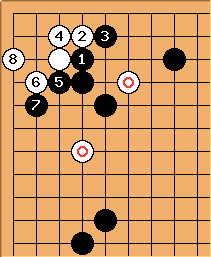 In the game white achieved life in the corner and later made a lot of trouble with the marked stones, splitting black and connecting his marked stones forming a strong group facing the center.

do? (It is early middle game.)

I see it is somehow a Tripod Group with Extra Leg, but the outside stones are not as strong as in the example there, so I'm not sure about the potential of white clamps etc.

Alternatives in the corner 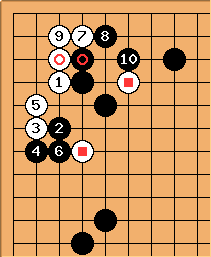 Herman Hiddema: It seems to me that the corner was not played very well by white. Especially

in the first diagram is a strange move. Here's what I would expect if black blocks the corner invasion

with the move at 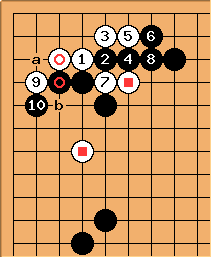 Herman Hiddema: And here's what I would expect if black blocks the corner invasion

the other way, with the move at

(white 11 at a, black 12 at b. Given the local surroundings, this seems better for black, but it depends on the position along the top side.

Tapir: "the corner was not played very well by white." was exactly my impression, that's why i stopped kibitzing then and made a hopefully interesting tsumego out of the result. Both players were 2k on KGS... (this gives me - 4k - hope that I can improve :) But white did live in the corner and even connected the both stones to form one strong group later... so maybe first white did play bad, then black i dunno... it's just a piece of context for the tsumego.