The following diagrams show either failures by Black or plays which create a ko. However the ko is not as good as in the /Solution. 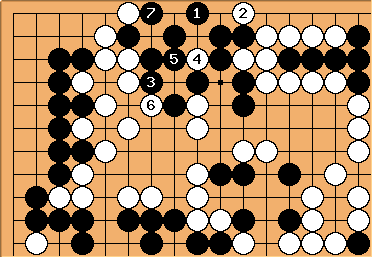 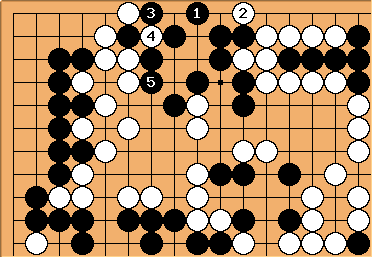 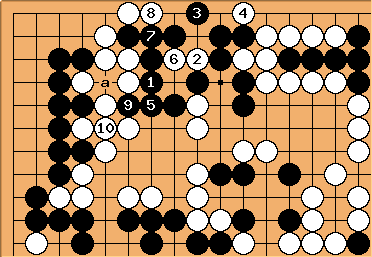 is an interesting move. White has to be very careful in order to kill Black;

puts White on the spot. Either let Black live or fight expensive ko. If White decides to go for the kill with

then Black even gets the first ko capture at a. Can anyone find something better?

, life still doesn't look obvious to me. What is the sequence please ? 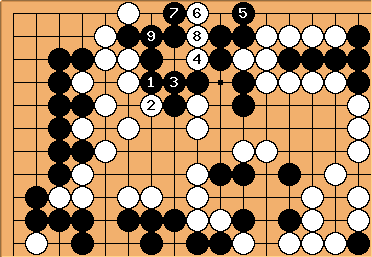 . Best White can get is a (sente) seki up to

nando: thanks Arno, but I still have a doubt: what if

now ? (sorry to bug you, I must be missing something again)

Arno: you are right,

Notochord: (Shouldn't ever ever have to be ko. Black has lots of eyespace and eyeshape, so it would be surpising to see him forced dead, and it is also rare to see such a relatively large eyespace made seki. I think

should be played differently. Black only needs 1 eye on the edge.) 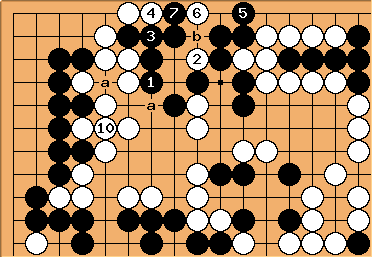 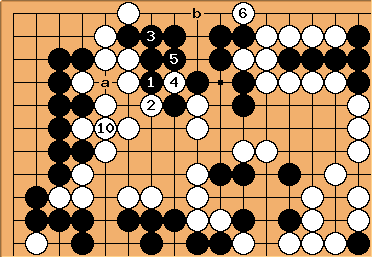 Notochord: Sorry: you are correct, I misread this variation. 'b' for

seems to be the only move.

is a killing move here. 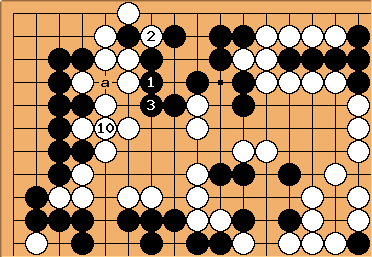 I'm very bad with calculational mistakes since I tend to operate a bit lopsidedly on the more intuitive end of things, so feel free to pipe up if I am starkly wrong.-

Just connecting directly should also pretty clearly work, since its practically the same thing, and the most vital point. 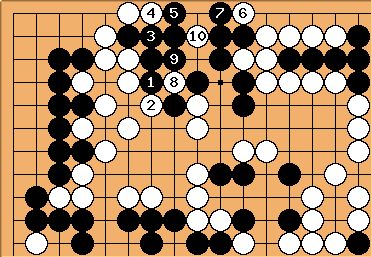 Notochord: I'm not sure that

needs to be obeyed.

needs to go at the best place for eyeshape. 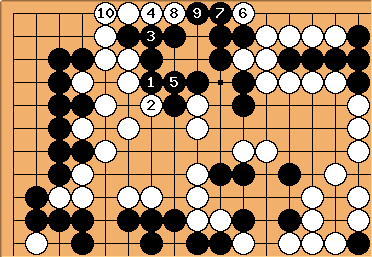 unkx80: Sorry but I can't help feeling a bit tired explaining this again and again. (But really, it's not your fault.) I shall leave it as a reading exercise this time. If you can solve Beginner Exercise 196, then you should be able to solve this as well.

Notochord: I see. Thanks.

DJ: May I have a try? What about

below? Do I overlook something? 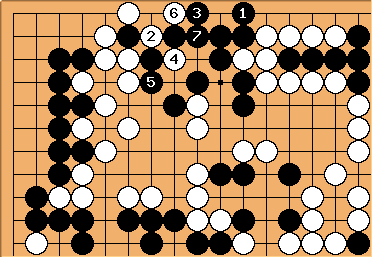 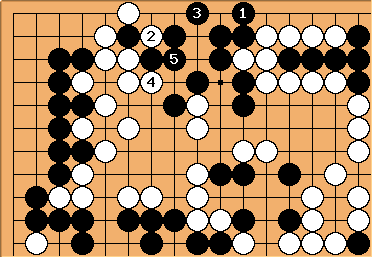 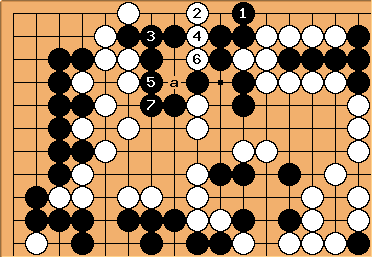 a a kills Black.

The long sequence shows nicely that a fight can carry on into parts of the board which you have not imagined earlier. Although in the end, the "long sequence" fails (sometimes only by one liberty in a semeai). 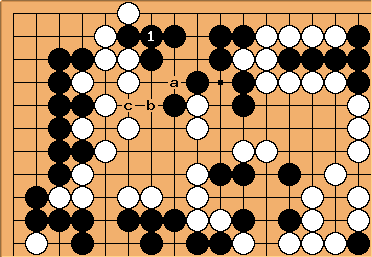 Dave: Quite and interesting position. In such a cases, I think the first question to be answered is what if Black simply connects? This threatens to force one eye along the edge. Also, as we see above a White throw in at a is frequently a very damaging play against Black's eye space. However, it is important to realize that Black has resources here as well. An early Black play at b, threatens to force a large ko at c while preventing the throw in. I haven't found outright life for Black yet but there are some interesting variations along the way. Let's see what people can find. :-) 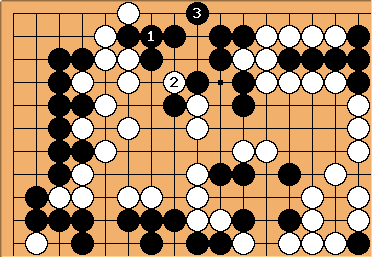 unkx80: This is frying my brain when I am supposed to be working on my thesis. ;)

I don't gurantee the correctness yet though. ;P 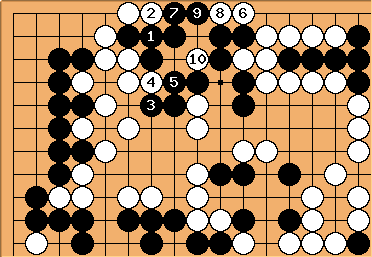 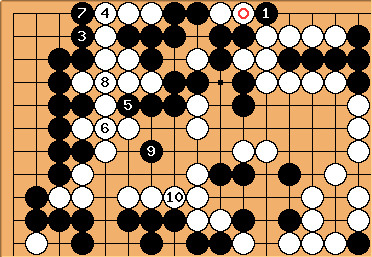 Dave: What a great idea! I had only considered the case where playing 5 as soon as possible starts a large ko at 8 where Black has a huge number of internal ko threats. 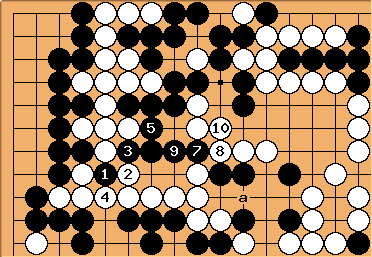 Dave: So White has to give way and play

at something like a allowing Black to live with 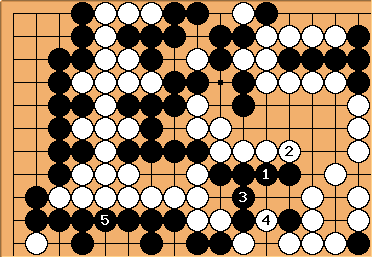 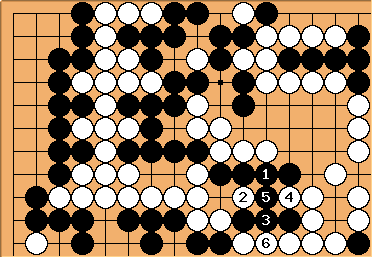 Dave: Black ends up short of liberties so... 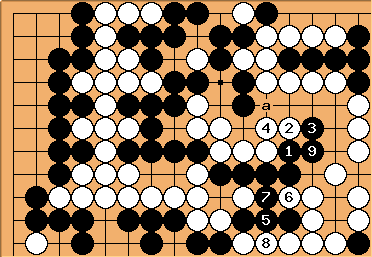 Dave: Black first turns aside at

threatening to capture the center stones. After

, Black can not cut with

because White a will create a snapback. However,

is a real threat that White must answer. Then the question comes up whether White has to play

wins the larger fight). If

would not be atari, White can plan 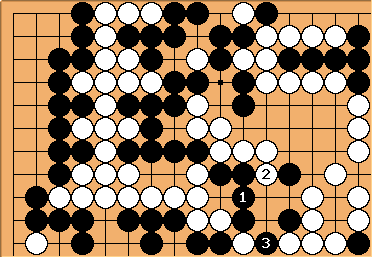 and then we need to know whether

is atari or not.

Arno: as I have now added the whole board you can see that

is not atari so the sequence does not work. Sorry. But I found a new line: 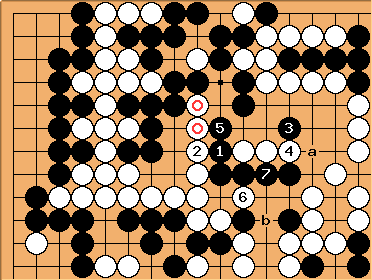 looks like winning it. It threatens to capture the two

stones, so White's best guess is

threatens the cut off the large group so White has to 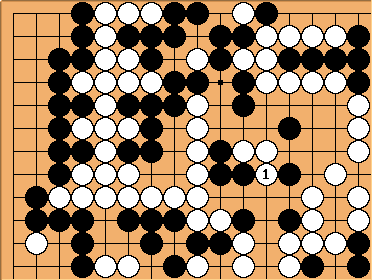 here. Black is short of liberties and cannot prevent the large White dragon from connecting to the outside. So Black is dead. Backtracking ... 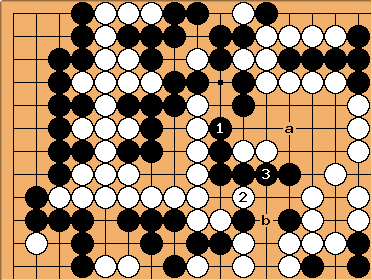 Instead of playing a immediatly, Black plays

. White has to play

makes miai of a and b so Black finally lives, or doesn't he?

Arno: I looked at the position some more ... 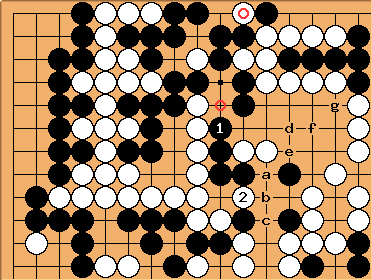 Because of the cutting point at

Black can neither make a second eye here, nor capture the White dragon. I looked at the moves a - e (the last one with followups f and g. In these variations the

stone provides the crucial liberty for the white top group in the semeai).

So I think the the long sequence (in all variations) fails. 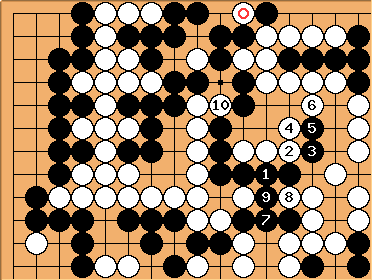 , White has time to play

cuts the center Black stones. Even though Black bends around with

to increase his liberties, White has just enough liberties to win the fight against the center stones (see below). 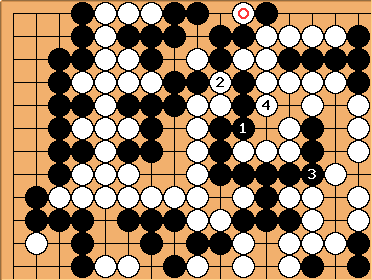 White is ahead after

with six liberties to only five for Black.