RueLue: All tried variations, equal if black or white begins, lead to white winning. I'm too lazy and distracted in moment to convert the file with attempts for the page.

RueLue: The key is a move at e16. If black connects, white captures (with k18) two stones and black has not enough liberties. There is also a bit aji to capture the h14 or j15 group (depends on black's moves). Black has two moves to threaten the g13 stones, trying to reduce the own bad aji. But this doesn't help either, as the blocking stones L17-L18 will be captured or white gets outside liberties. One chance for black is, to begin with j12. White must answer this with e16 to reduce black's liberties. To play the best sequence is a 2-5 dan task and depends (for black) on using the remaining aji of it's dead stones for getting compensation. 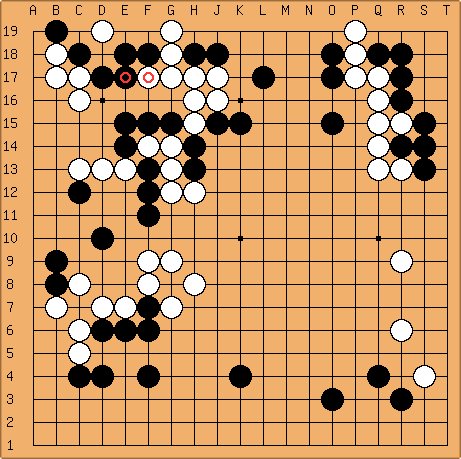