I came across this position in our game of initially 10 min each (which Black failed to comply with). Then we continued to play for about an hour in total and this position occurred: 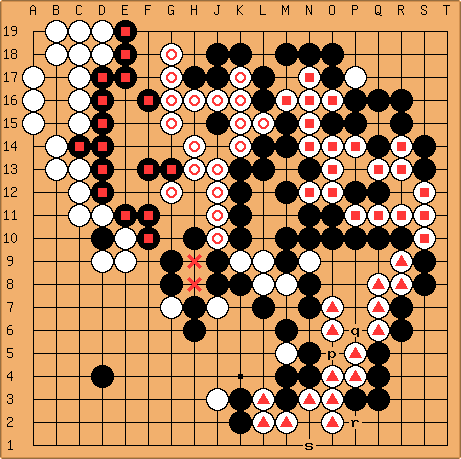 To my own defence for this groggy position (White is everywhere in the ropes), I must say that I pointed out a crucial error to Marc , otherwise I had captured the K10-13 stones in midgame, so I let him take back a move. Objectively this should not have been possible either, but in a commentary, the stronger player is always playing against him/herself (otherwise no handicap would have been given).

As is apparent there is indeed a quite 'dead' - circle-marked K16 group at the top edge, which only could happen because White was too greedy (read the 1st of The Ten Golden Rules List) with white H16 near the strength and did not just escape into the center. Also, the other cross-marked group is dead for now.

The position is quite correct, I'm at present not very sure about the K2,3 stones, but the 3rd group is also not very stable, if Black would play R, then sente S threatens, whereafter Black could make the eye Q false by black P.

White had an idea when she played her move,
however , in the end it should not have worked.

What gives good chances of success in a handicap game?

Where could White play now?