These are examples of how traditional Alak (normal Go rules) might play for boards of different sizes. Some board sizes have the complexity of a simple Go puzzle; others are worthy of many replays.

Depending on the board size, either White or Black has the advantage.

To reduce the length of the page, a series of moves are shown one line after another; this should not be read as a single 2D Go-board, but as a series of Alak boards, each showing one or more moves.

5-square Alak works as an example board, to explain the game.

Opening in position 3 loses. a loses after Black ends up with an 'inelegant' Alak shape, with pieces on the edges:

A short-lived clearing of the board by Black ends with a solid shape for white. Black is forced to pass on move 7. Final score: 8-2 White.

Other moves also lose after that first move:

Both pass, white has 1 extra capture.

The smallest board where a novice who knows the rules might still make he wrong move. Played out in full on the Alak page.

Black can win in 3 moves by opening in position 4:

If White follows at p2

If White follows at p3

Let's look at Black opening at p5. White can respond at p2 or p3.

s can lead to a draw, but a wins immediately: the next turn Black can ignore a play at b (inside White's territory), and captures c or d.

r would be captured leading to a swift loss. s leads to a symmetric position with no good moves for Black (shown here). So Black should respond at a

Black must choose b or c. 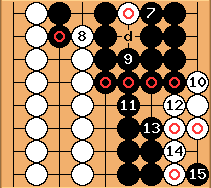 Here Black fills in at d on move 9 to prevent White from clearing the board. Having an empty space at the edge, and a stone on the space next to it, seems similar to having one eye in Alak. White is able to keep black from forming that shape, forcing Black to form a vulnerable shape that connects at the edge.

White has a move she can make elsewhere on the board, letting her close in for the win. If Black passes on move 17, White can play at p8 and clear the board. So Black fills in, but White still wins.

If instead Black plays at c at move 7, this happens: 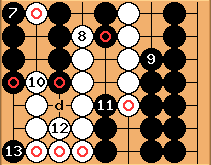 Now it is White who fills in to avoid a worse defeat. 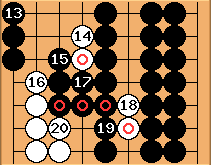 I'd like to see an analysis of 8- and 10-Alak. 11 doesn't see to be that interesting with traditional rules; 13 might be more fruitful. -- Sj