The use of the Bible in Go

The use of the Bible in Go

There are many philosophical and theological works that can be applied to Go, and the Bible is one of these theological works. Every country in the history of mankind has had some kind of philosophy or way of explaining the natural events around them, so it should be no surprise that the strategic principles of the universe should develop in different civilizations.This page will present over time, some evidence that the Bible is a book of strategy and wisdom, but will not give all the strategies because there are far too many for this page to contain. To gain even more, one must search their own Bible. All of the Scriptures quoted on this page are taken from the New World Translation which is credited with being the most accurate english translation, combined with being the easiest to understand the text. (The King James Version for example is very hard to understand in many cases.)

First, the Bible says that it is a book of wisdom directly at Proverbs 1:1-4 which states that these are: "The proverbs of Solomon the son of David, the king of Israel. For one to know wisdom and discipline, to discern the sayings of understanding, to receive the discipline that gives insight, righteousness and judgment and uprightness, to give to the inexperienced ones shrewdness, to a young man knowledge and thinking ability." This shows that the ancient Israelites had concepts of wisdom and strategy. Second, in his book

The Military History of Ancient Israel Richard A. Gabriel writes about the strategic principles applied to Biblical battles. There are many Biblical examples of instruction on strategy as well- this includes Scriptures such as these:

When applying this Scripture, one needs to look at the board carefully, and plan ahead. One cannot succeed in Go without doing these things.

When applying these Scriptures, one must understand that one's opponent will try to lead one into a trap. This means constantly being on guard for any kind of trap. Also, the opponent may use baits to entice one into falling into the trap. One part of these Scriptures shows that hastening to fight without prior strategic reason results in loss. An example of this is the strategy of Cosmic style- the style uses a large moyo to try and lure the opponent into invading, and then attacks the invading group forcing it to be small while solidifying a large amount of territory in the process. 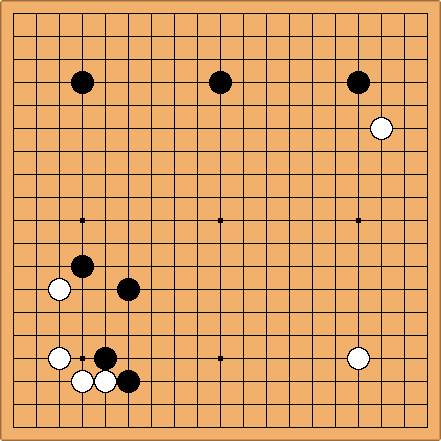 This Scripture shows that one cannot catch a fast moving player with slower moving tactics, and it also means that the one observant and taking a step back will have the advantage over one who blindly charges into attacking the opponent's groups and territory.

These Scriptures show the same principle as the one of the thirty six strategies that says to befriend states that are far away. This allows one to gain advantage by synergy instead of only on one's own strength- or in Go, using far away groups in a synergy of cooperation. One thing to notice is that this passage is in Luke- part of the New Testament. This shows that all throughout the Bible there can be many strategic concepts that one can learn from.

All Bible Principles of conduct also have a much more strategic purpose. In ancient Israel, the Law was in place, not only to maintain order, but to keep the people in one accord with each other and their leader which is a key Principle of strategic operations of a government and even in military campaigns. The two greatest commandments has shown to be just that. Now, there are key differences between Laws and Principles in the Bible as well. The Law said not to steal, the Principle is not to become greedy and thus can be applied to a Go player who is greedy in the game which leaves him vulnerable to counter-attack.

Anon: Another interpretation of Proverbs 1:17 is "don't use a net to try to capture something more than one eye"

TheBigH: Proverbs 10:4, "He who has a slack hand becomes poor, but the hand of the diligent makes rich."