From the earliest times the Japanese have studied the opening of the game. Especially since the foundation of the Go Academy there have been systematic treatises on this subject, and for keen and thorough analysis, these treatises have nothing to fear from a comparison with the analogous works on Chess openings. There is, however, a difference between the opening of the game in Chess and the opening in Go, because in the latter case the play can commence in each of the four corners successively, and therefore, instead of having one opening, it might be said that there are four.

The Japanese masters usually overcome this difficulty by treating a corner separately, as if it were uninfluenced by the position or the possibility of playing in the adjacent corners, and in their treatises they have indicated where the first stones in such an isolated corner can advantageously be played. These stones are called Joseki. As a matter of fact, these separate analyses or Joseki differ slightly from the opening of the game as actually played, because it is customary in opening the game to skip from one corner to another, and the moment a few stones are played in any corner the situation in the adjacent corners is thereby influenced. It is due to this fact also that in their treatises on the Joseki the Japanese writers do not continue the analysis as far as we are accustomed to in our works on Chess. While this method of studying the openings persists to the present time, one of the greatest of the Japanese masters, Murase Shuho, compiled a series of openings which correspond more closely to our Chess openings; that is to say, the game is commenced, as in actual play, all over the board, and is not confined to the study of one corner as in the case of the conventional Joseki. Korschelt, in his work on the game, inserts about fifty of these openings by Murase Shuho, with notes that were prepared by the Japanese master especially for the use of foreigners, and I have selected a few of these in addition to the collection of Joseki which we will first consider.

The work from which my Joseki have been selected was compiled by Inouye Hoshin, and published in November, 1905. It was originally written for the Nippon Shimbun, a newspaper published in Tokio. Of course, the annotations accompanying these Joseki are not the original ones from the Japanese text. Many of the things which I point out would be regarded as trite and obvious to a good player, and my annotations are intended solely to aid beginners in understanding some of the reasons for the moves given. It must also be understood that the series of Joseki which I have inserted falls far short of completeness. In a Japanese work on the game there would be at least five times as many.

Although the Joseki have been studied by the Japanese masters from the earliest times, it does not mean that the ordinary player in Japan is familiar with them; just as in this country we find a majority of Chess players have a very limited acquaintance with the Chess openings, so in Japan many players attain a fair degree of skill without a thorough acquaintance with the Joseki. It would certainly very greatly aid the beginner in attaining proficiency if he were to study these examples, and follow them as nearly as possible in actual play.

It would seem to us that in compiling a work on Joseki, or openings, we would commence with the openings where no handicap is given, and later study those where there were handicaps; it is another instance of the divergent way in which the Japanese do things that they do just the opposite, and commence their treatises with the study of openings where handicaps are given. Inasmuch as this is a book on a Japanese subject, I shall follow their example and shall commence the study of Joseki in games where Black has a handicap.

White
1. R 14. Kogeima kakari. This is the most usual move for attacking the corner. The purpose of Whites first move is to lay a basis for future aggression; he cannot, of course, play in the corner immediately, neither can he play nearer the black stone with advantage.
3. R 17. This is a direct attack on the corner. White can either connect with his first stone or form a living group in the corner.
5. S 16. White threatens to connect.
7. S 17. White cannot play at R 15 at this time because he would lose the stone at S 16.
9. P 18. Since White cannot connect, he must play to form two Me in the corner.
11. Q 17. White makes his corner as large as possible. This move is also Sente, because it threatens to break through Blacks line.
13. S 14. White threatens Watari, and again Black must reply at once. (Sente.)
15. Q14. To confine Blacks group and prepare for territory on the right side of the board.

Black
2. N 17. This move supports the handicap stone and also gains as much ground as possible for Black. Beginners would generally find O 17 more safe and conservative.
4. R 16. Black plays to prevent the connection of the white stones.
6. S 15. Black breaks the connection by this move.
8. R 15. Black also must connect. Beginners are prone to neglect these necessary connecting moves.
10. P 17. Black plays to connect his stones, and at the same time confines White to the corner.
12. O 17. Black must connect to prevent Whites escape.
14. T 14. Prevents Watari.
16. P 15. An important defensive move. Otherwise White could almost envelop the black stones.

Even game. White has a small territory in the corner, but Black has greater possibility of expansion. 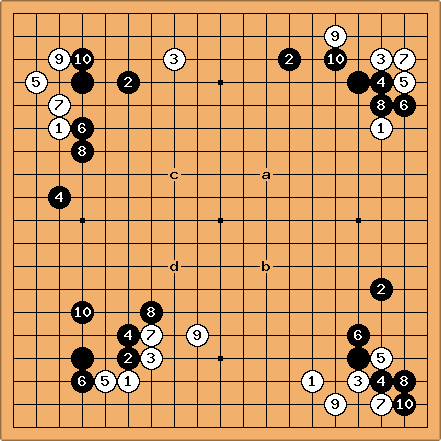 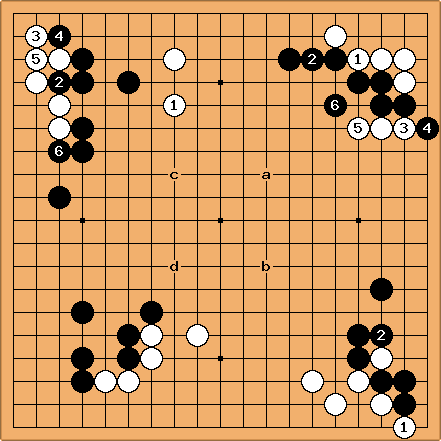