Archaic 2d kgs: I haven't thought this thoroughly through yet nor have I read this entire article but just from this brief description I read about it (like two words movement of the horses/stones), I think haengma might be an intuitive grasp, the more variations you can read, the logic of your shape, etc. the more you can turn go into a fixed game, if you consider the "overextension" it sacrifices strength and creates a weak position in order to gain a bit more (either from a seal later on in the game or indirectly protecting against an invasion by one-space jumping out into the center or having stones placed elsewhere) and this may be true because this overextension might actually be a gain rather than a loss if you had to protect it with another move depending on how the moves in the game flow to the end and whoever takes the biggest points on the board from beginning to end (the concept of gain), then again because it is a weak position it might be a loss if your opponent invades it (which creates another dimension of depth), so I suppose the accurate (perhaps degree of strength of your intuitive?) assessment of the value of your overextension is one application of haengma...other possible ones being weighing the risks of efficient sabaki (light play to make one's groups safe while maximizing value) over safe sabaki, etc.

I suppose anything that involves intuition is what we can call simply difficult an unconscious quality/strength that can only be developed over time... 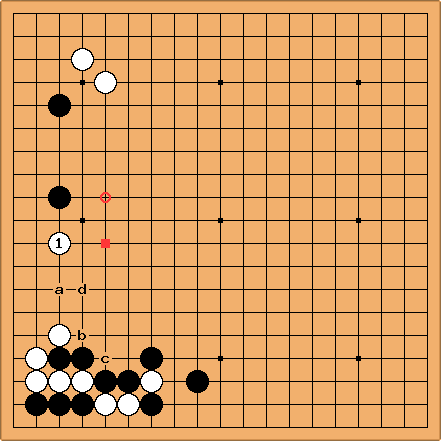 Here is a demonstration of haengma possibly, this following diagram illustrates the "fixed" nature of go white makes the loose extension at 1, obviously the invasion at a doesn't work white pushes up at 'b', black 'c' followed by white 'd', it might seem that black will just ignore this position for the time being and tenuki and gain elsewhere and attempt to try to make this position look out of place and weak in the future and possibly even make white waste an extra move defending it in the future which would definitely make the loose extension look like an overplay if not now, then later on in the game...but that's the brilliance of this extension, because it seems as if whatever move black plays in elsewhere...white's formation there is still strong and at least capable of escaping towards the center after a black invasion at 'a' white 'b' black 'c' white 'd', unless of course he eventually runs into a dead end while trying to escape towards the center...but for the meanwhile this formation seems not only strong locally...but strong enough to remain even as the game progresses and even if black attacks indirectly with a one-space jump at the circled point white can just play 'b' then play the one-space jump squared point...this attributes to the fixed nature of go as well as the "moving" nature of go...