Both Catalin Taranu and Cristian Pop spent their insei years with Saijo as sensei.

informal obituary was written by Robert Jasiek on L19, in which he states that Saijo

attended every European Go Congress from 1993 to 2010 except for 2003 (Russia because he - like many - had had bad experiences with border controls) and 2004 (second Tuchola because he disliked the repetition of venue).

At EGCs, Saijo would appear during the morning, briefly peeking into our playing rooms. Afterwards, except for meal breaks and excursion Wednesdays, he would be teaching or playing teaching games to typically 2am (if the venues would allow that). While some other teaching professionals would do the bare minimum they were scheduled to do, Saijo's teaching efforts were only interrupted by sleep late during the nights. He would prepare thoroughly before his lectures and he commented on everybody's games or played against everybody waiting long enough for his seat.

and there during the European Go Congress 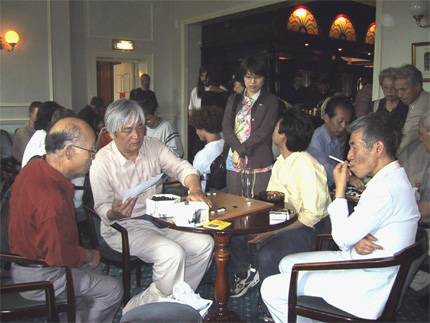 Saijo Masataka was promoted 9-dan when he retired in 2004.

[1] When was this appointment?