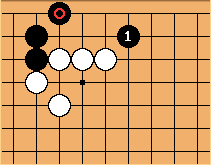 Jumpy monk literally reversing the term monkey jump is the humourous version of this term.

Situations in which it is used

Sometimes, it is useful to realize that you can play a monkey jump in reverse, because you can descend to the first line in sente. 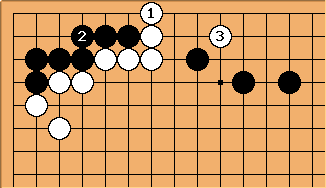 is sente against the corner. Black must defend with

or the corner will die. After that, the reverse monkey jump

destroys black's territory along the top. 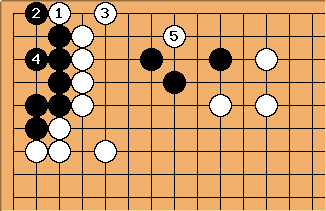 threaten to make ko of the corner.

destroys the base of the black stones, forcing them to run. See also: Threatening a ko

Quite often, it is better to forego the sente move that makes the reverse monkey jump possible, and instead play it directly, consistent with the 1-2-3 principle. 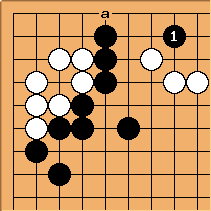 is an application of the 1-2-3 principle. A black move at a is sente against the corner, but black does not need to play it. 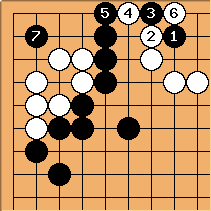 If white fails to realize that the descent is sente, and tries to cut off

turns the whole corner into a ko. 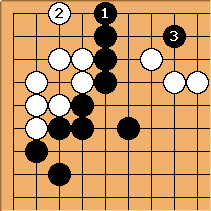 If Black plays the descent in sente, it induces White to defend her corner, Black lose points here compared to playing

directly, which leaves the possibility to play other endgame plays against the corner later. 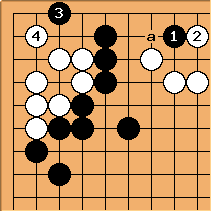 defends against further incursions into white's territory along the top. Black can then switch to the sente endgame in the corner, and can choose to play a when and if that becomes the biggest gote endgame move.

Some tsume-go that involve this tesuji:

unkx80: Did a search using the following pattern. Relevant results: