fractic: With enough stones a proof isn't so hard. The idea is to divide the board into segments. Let white live in some and make sure that in the other's he can be provably killed. For example, consider the following position where Black gets 68 stones. 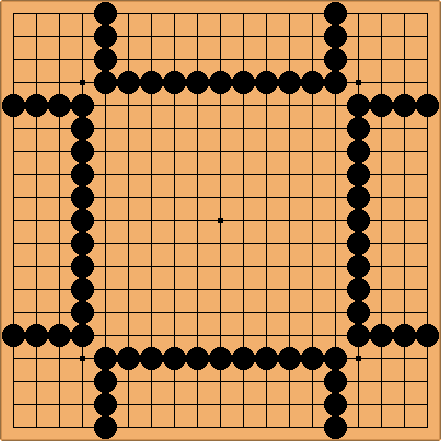 fractic: Black's strategy is the following. The board is divided into 9 segments: 4 corner's, 4 sides and the center. Black will always play in the same segment as White has just played. Black can provably kill White in the corner and side segments so White might as well not play there. This gives Black 4*(16+27)=172 points. It's not possible for white to get more than 81 points out of the center.

fractic: Black will play a unless white plays there and b otherwise. He will then connect this stone to the top and bottom splitting the area into two pieces. This will take no more then 4 net moves the maximum being attained by the following sequence:

fractic: White may try a few other things but Black can always connect in such a way that White will not have more than 3 useful stones on one side of the barrier (

being not useful in the diagram). This just requires checking a few variations.

After Black has built this dividing line the largest of the remaining pieces is 3x5. The largest eyespace that White could hope to build within this is a rectangular six. With just 4 stones in place Black can easily mess this up and kill White.

There are still a few small things left open here but it's not all that hard to do. The search space is limited enough for a computer to brute force all the variations.

This proof can easily be improved upon by writing a simple strategy for the center. For example: 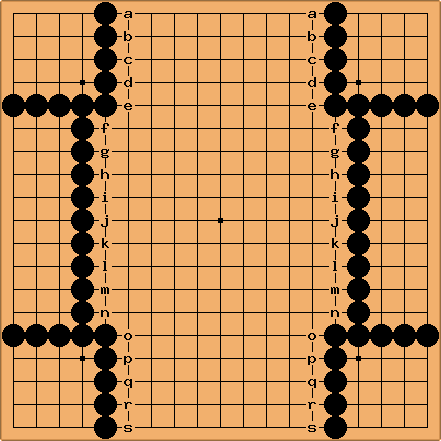 fractic: Here Black is guaranteed 118 points while White could potentially score 151 in the center. However Black can consider the points with the same letter miai. So he will get at least 19. Then do a similar trick and get at least 9 more moves. Then 4 more and two more leaving white with only 117 potential points. And this strategy is far from optimal.

The problem with this style of proving is that it's significantly easier to increase the margin by which Black wins than to decrease the number of stones required.