YYGO is an IGS client for symbian s60v3 and above mobile devices. 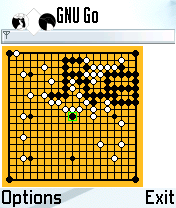 Tderz Who knows anything related for the Sony-Ericsson T600 series?

Kosh Is that J2ME running on the T600? Maybe

HandyGo or Mobilephone will help.

Break?: None of the three SGF viewers listed above are actually Series 60 specific. They're not even Symbian applications, but Java midlets that work on any MIDP 1.0 capable platform, like Nokia's Series 40 for example. Anyone have an idea how to organize these SGF software pages in a more logical manner?