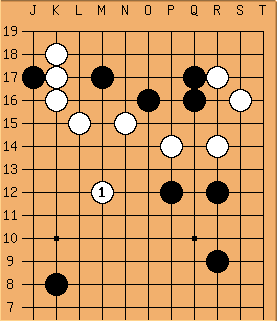 White has a stick wedged between two black groups, and they want to make some points in the center while reducing black. Is

I am only KGS 1d, but imho reducing moves should be considered in whole board context.Afterall its possible that any reducing move is mistake and invasion should be played. Personally i would think of shoulder hit to black M15.

Neferneruaten? (DDK): You're still much stronger than I am so thank you for weighing in. The goal of my little articles is to help me extract useful principles from my games. I'll definitely add your suggestion of whole board thinking since that sounds like a useful principle.

Analysis of the horse head 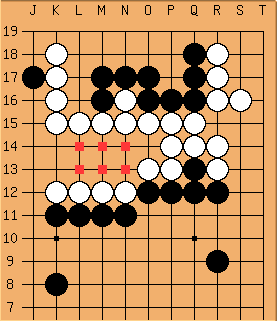 First let's talk about the idea of extending from the stick into the center. Barring cuts or heavy fighting, white can stand to make a small number of points here. But they should carefully consider whether an invasion or a bigger move elsewhere would have been more profitable. More on this later.

kmr - Idea of making here territory does not look good. I dont know what is in lower right corner which is pretty important what to do in adjactent area, but white stones on top are pretty strong, so the proverb says "play away from strong stones" (it also indicate to play either in most open area, or close to enemy weak stones to attack them). Ofc if white can kill black top group its probably biggest play on board, but if subject is how to deal with black framework (hard to say is it framework or not since we dont know whole board position), this horse neck extension still does not look like biggest move. On contrary, if white would be leading by a lot, this might be good safe move. All depends on whole board position. 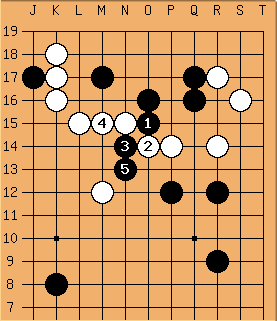 In this Leela sequence, the horse head is unable to defend adjacent stones. 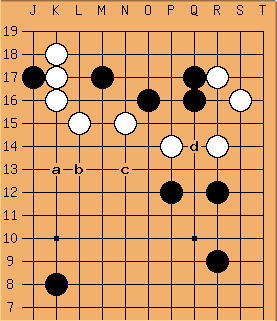 In terms of jumps, Leela prefers the less contested extension at a, and the one-point jumps at b and c. 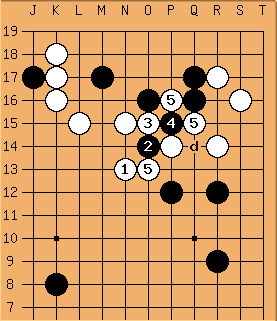 Let's go with c for the sake of argument. If black cuts, white cuts back.

If I'd played this, I would not have gained any substantial territory like I wanted, but I would have built a stronger shape.

When the best defense turns out to be a good offense 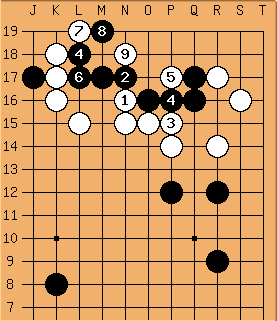 The black group at the top is weak. Leela suggests a series of reduction moves that eventually kill this group. This is a good reminder to take note of my opponent's weaknesses when I'm not sure where to play, as in this case it could have been very profitable.

kmr - there is sth wrong in this sequence. Black played move "4" two times, and white move "5" does not make sense for me. Maybe whites "3" should be in different place to make "5" make any sense (cuz now "3" looks also not good). 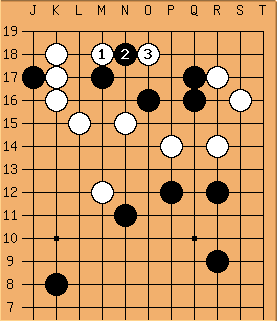 In the actual game, I realized this group was weak but went about killing it in a different way, by invading its eyespace and not reducing first.

It feels like I would have been able to kill it, but I admit I only read about two moves in. Leela's analysis is a good reminder that in some cases, reduction is worth as much as an invasion. It's worth noting that Clossius suggests reducing the eye space from the outside first to see the shape on the inside, rather than invading first.

In this situation, making space in the center was clearly not the right choice: my stick was full of weaknesses, and trying to extend would have only created more. 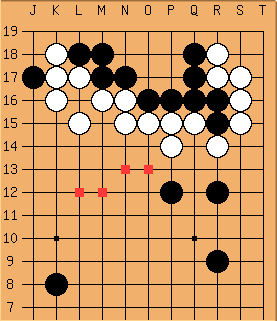 My priority should have been on strengthening my group by attacking my opponent's. Even if I hadn't been able to kill the black group, I might have come out with a strong wall and sente, and in a better position to extend towards the center like I wanted.