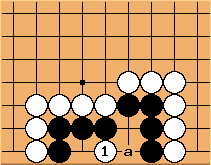 Bill: I am not sure that

is nakade in the technical sense.

John F. I agree with Bill's intuition, but also share his inability to sound totally convincing! Perhaps the source of the problem is that the page where nakade is defined is incomplete, unless you make it plain that this particular nakade is meant to be an "English" word with restricted meaning compared to the Japanese version.

However, it has to be said that the Japanese definitions of nakade are far from ideal. Most limit the examples to the traditional "bulky X" shapes, but I have seen cases that are cuts (one example in a magazine claimed the biggest ever nakade for a 36-point area, but started with a cut; other cases show a move that would normally be called oki, as witnessed by the fact that virtually the same diagram was used for oki in the same book). Most books give one definition; the sublime Hayashi gives two. Some allow nakate as an alternative; others don't.

I think the way to get a handle on this is to follow Hayashi, for authoritativeness, and to explain how his two defintions can be reconciled.

The base meaning is a "move inside". Hayashi does not restrict this to any particular shape except to say that the surrounding group is "continuous". From the examples I have seen, it is safe to say that the shape into which the "inside move" is played is always fully enclosed. It may, however, have defects.

Of course, Japanese has a richer technical vocabulary than we do, so an "inside move" can often and more easily be given an alternative and more nuanced term: cut, oki, etc.

The second Hayashi meaning is the special X-moku nakade phrase. This is the phrase that has tripped up westerners so often, because they interpret it as a shape. The way to understand the original phrase is (a) to remember that Japanese does not usually distinguish singular and plural and (b) to treat moku as a counter. Gomoku nakade can then best be understood as "five inside moves". By association, of course, such phrases are closely bound with life-and-death and the "bulky" shapes, otherwise there's not much point in them. But it's an association, not a definition.

The Chinese word here is dian (and the character for it was often used in old Japanese texts and glossed as nakade, but sometimes also rendered as oki). Like so many Chinese terms, you often get the nuance better by viewing the term as coming from martial arts rather than the ordinary language. In Chinese sword-play, a dian is a stroke where you go slightly up and over the opponent's sword, arm, leg, etc to poke into a weak point (slightly) downwards. In go, it is as if you are approaching the group surrounding the space with your sword, you tip the point as you reach the wall, pass over it and stab downwards.

I have edited the definition of nakade. The new definition is informal, as I think is appropriate. We may need two definitions, though. My edit is only a suggestion.

unkx80: Sorry John, but which Hayashi? (Then I shall update the "other discussion" section in Largest capture that still can't live.)

Bill: I think he means 林 裕 , who wrote, among other books, a go encyclopedia. (I am not sure of the pronunciation of his given name, maybe hiro?)