There is this query, of interest only to combinatorial mathematicians really.

Everyone[1] believes that go with a group tax of two points per group is for practical purposes equivalent to go modified with the obligation to play (no passes), player with no legal plays loses.

That is, when both players have played inside territory to the point where one player has to fill a one-space eye, allowing the other player to capture that group, the game is effectively over and the player losing the group will also lose the game.

Has this ever been proved?[2] The space left by the captured group could in principle be large enough to live inside.

More accurate form of question: is this even true for go on an arbitrary finite graph?

I had thought about this but until someone else asked about it I didn't think that was a problem. Now I think I see the solution.

This is a problem in very even games, where the final position is { | } (if not, the player who is ahead will have the option to tenuki inside his/her territory during the ensuing fight to live in the newly opened space, and that can't be bad). This means that the next player to play has to fill a one-space eye. Assume this player is white. Then black will capture one of white's groups. For simplicity (and because it seems to be better for W), assume that W has only one large group. Then the situation after the capture is something like 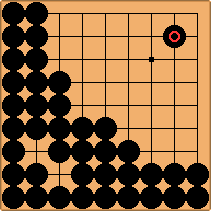 Well indeed - even with a correct formulation of the question, I don't think this is a practical difficulty. It is a matter of proof, that would work even on huge board. Charles

Black wins by stone scoring or ties by territory scoring with a group tax. But White wins no pass go.

Hehe, I just put my foot in my mouth big time :-) Migeru

I've just done a search for 'group tax' in old rec.games.go threads, and see I should have rather said 'Somebody ...'. Charles