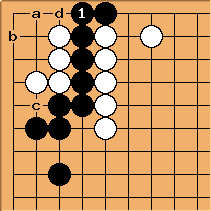 . If white plays c it makes an L+1 group which, with black to play, is dead. If black tenukis here, white a, black b white at

Notochord: Is ko with black capturing first going to be (in the majority of cases) the best that white can get here if black tenuki? Looks to me like d forces 1, then b lives. I agree with the rest, though, I think.

grolich: I have to agree with Notochord, the suggested ko is definitely NOT the best white can do if black tenukis, as white d threatens to link up to the outside group, and after black connects, white b seems to just live easily (descending to the edge with white instead of b in the given variation, creating a rectangular six in the corner seems inferior, although with 2 outside liberties, the white group is only vulnerable to a multi (3!) step ko, which means it is virtually alive, but a play at b just lives without leaving behind any of this nonsense).

TimK: Why doesn't b also kill? 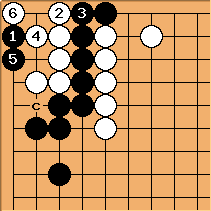 unkx80: This is a disadvantageous approach ko for White, but still a ko.