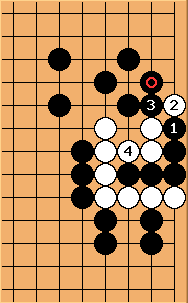 If Black plays first he can kill White by playing

. White has to answer at

otherwise Black's stones can escape to the marked stone and White dies.

. Note that this play reduces White's eye space - it is no longer possible for her to make an eye at

White has to capture at

. If she does not, Black captures

and his stones escape. 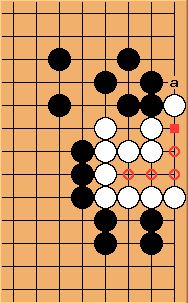 In this position we see that White's eye space is four points in a row (the circles). The squared point is not eye space (imagine Black playing at a).

But four in a row (bent four) lives, I hear you say. That's true, but only if its borders are completely defined. Here, one side is still open. So ... 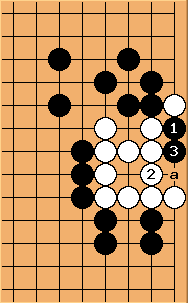 ('There Is Death In The Hane') and reduces White's potential eye space to ThreeInARow. However, White would have to capture

and divide the space with one move - something that isn't possible.

White's best attempt is to play at

. But this fails as well. Black plays at

and White is left with only one eye.

Also notice that black has another killing move. The placement at 2 makes miai of 1 and a. 3, of course, fails to repair the eyeshape. 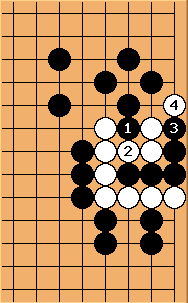 here is a mistake. It robs the black stones of an essential liberty. 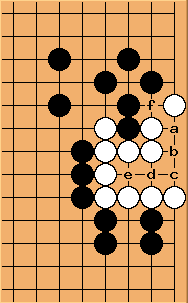 If Black tries to falsify an eye with

at a leaves a live bent four. Any play inside is met easily by

at f. Black can play inside a second time, but it's no use - that's only two plays, and any of the three points b, c and d let White divide the space; and there are no cutting points to exploit.

Even if White were careless and let Black take all three points while playing tenuki, it would just make seki. (That only costs White six points actually; four in territory after making the eyes, plus two prisoners. But Black can later sacrifice that seki at an eight-point cost, and get two ko threats out of it. Tenuki plus two points net in exchange for two ko threats...any expert opinions on that trade-off?)