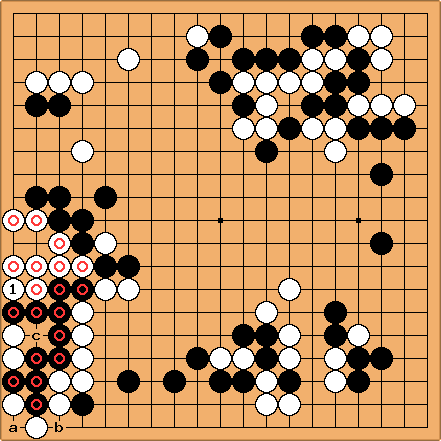 This is game 2 in the final of the GS Caltex cup of 2013. White is the eventual winner Kim Jiseok. Black is Lee Sedol.

Kim is definitely ahead in this game after a major gain in the upper right. In the bottom left he has staged a ko, having the two marked chains at stake. The surrounding stones of either color will also be influenced by the ko.

The ko at a is a direct ko for both: if Black wins it, he can live at b. If White wins it, White can capture at c. Notice that Black has an internal ko threat: he can capture two stones at c to gain tempo, because White will have to throw in again. 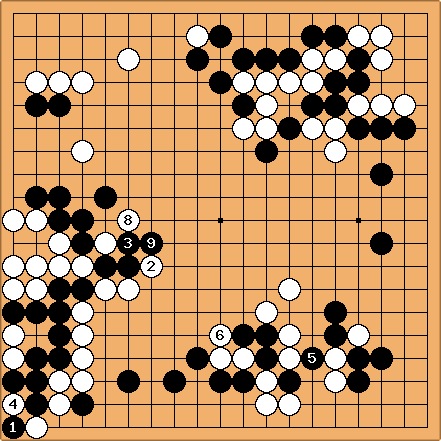 And off they go, with Black to take the ko first at

. White uses the cutting stones as a resource for ko threats, which are in essence internal ko threats. Black uses the bottom as a resource. It is not so easy for me to gauge the Black territory, if White would resolve the ko. It seems to me that White's three corners are larger than that, especially since Black's stones in the upper left side will be affected. 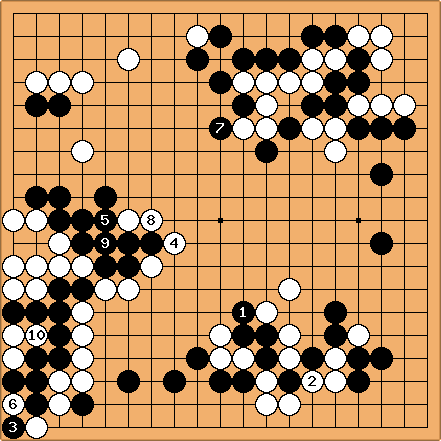 Black continues to threaten the lower side with

makes another stab at the cutting stones. Then the exchange takes place:

threatens to turn around the upper side capture.

quickly forces Black into a lump before resolving the ko at 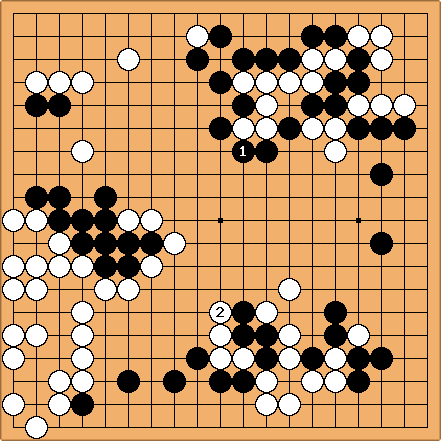 captures 8 stones, saving 6, amounting to about 30 points, plus extra pressure against White's corner. White has taken a comparable amount of points in the bottom left corner. But

reveals the true value of the exchange for White. The black stones at the bottom are in dire straits. Looking at the whole board, the black dragon in the upper left is not in too good health either.

Again we see the value of resolving the ko: it takes sente. White will win by resignation.