A summary of my teaching. 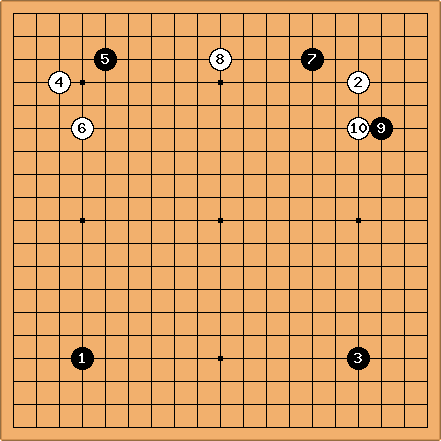 This is a game I played against basically my only "student" he refuses to take handicap (we learned together and were 12k even matched, then he quit for a bit and I kept on now its 9k vs 16k). I just removed komi to make it a one stone handi game, and he didn't care. I'm trying to play far more relaxed in this game, but I find it difficult to find a point that's useless enough that he won't follow me to it! 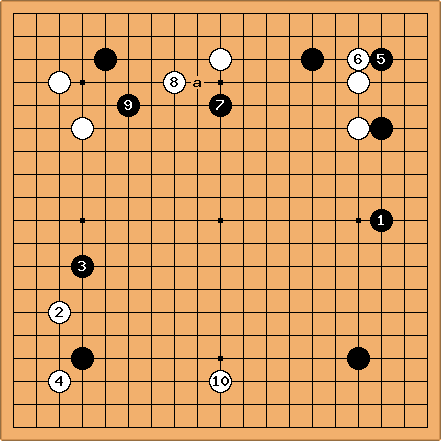 Move eleven here made me happy. He usually doesn't play these pulling back, territory type moves (his main weakness). So I don't attack it.

is his favorite type of move, and so I took 4, intending to show him the full joseki for it. 5 is more urgent, and so I block at

hoping that he will just follow the pattern down on his corner too. 7 is an ok move (he tried first at A in another game we played from this position) and 8 is natural. 9 is odd, but I played 10 to let him decide how he wanted to proceed. 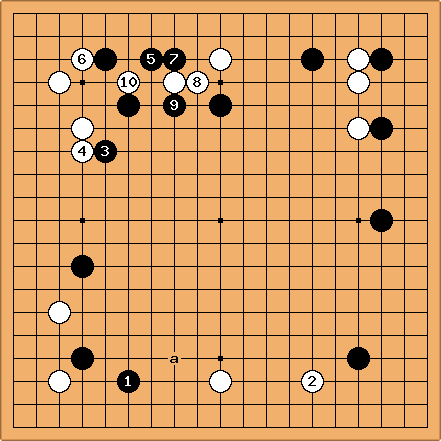 He first tried a, but after I pointed out the sansan stone, he moved it to 1, with which I extended 2. 3 is odd, but I kept calm at four. five to create a Base, and six to help him strengthen it. 7-8 is a useless forcing exchange, but 9 is odder still. I invade at 10, forcing him to strengthen. 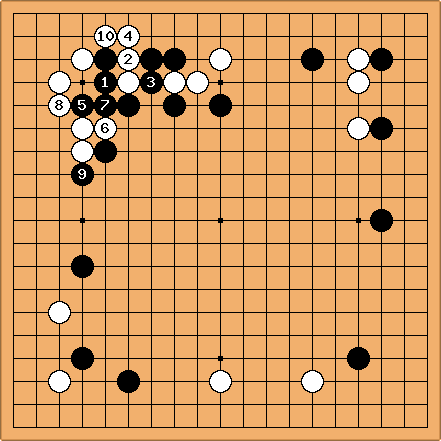 1-4 are forced, and five shows his fighting spirit (finally!) 6 is an asking move about how he wants to fight, and like usual these days he backs off. 8 defends a vital point to give him sente. 9 is odd, I take 10 to see his continuation. 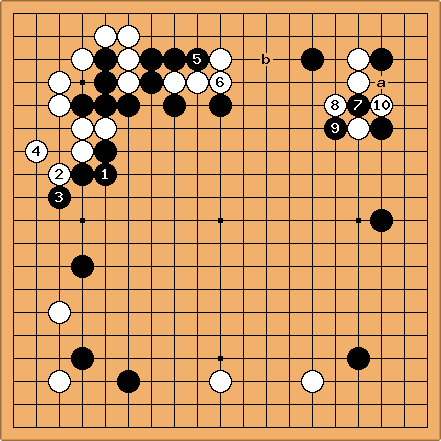 He defends the cutting point wisely; however, he's going to have to work hard to make the influence work. I expected

would come, but I had prayed that a would be played first. I wish I had found a kinder move for 10. Maybe sacrificing the corner and taking b instead? 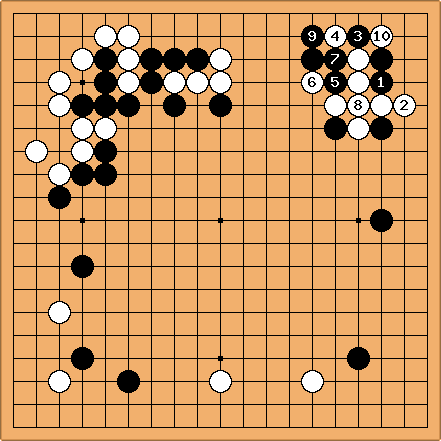 is unfortunate in both what it forces (and I should have not played) and in being too late. 6 is an attempt to strengthen him, and it works well... 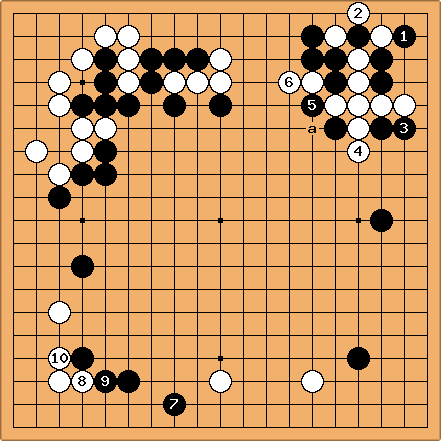 Until he makes the thinko of 1, which he didn't want to take back, thinking that he had taken back too many moves already. I played

, although I should have tenuki'd. 3 is too low, and 4 again shows my unfortunate bullyness here.

was better at a, considering my goals.

is too low, but in the right direction. 8 and 10 to help him build power. 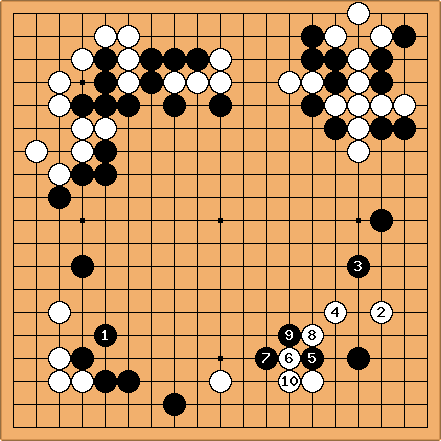 literally asking to be attacked, or for him to defend I don't care!

is great, and I give him 4 so he has a running group to attack.

is wonderful, as it develops, strengthens and attacks.

is an overplay. He simplifies with 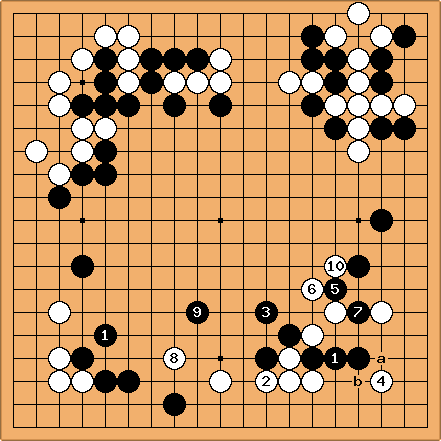 saves the group, but it still is vulnerable to his second line stone. 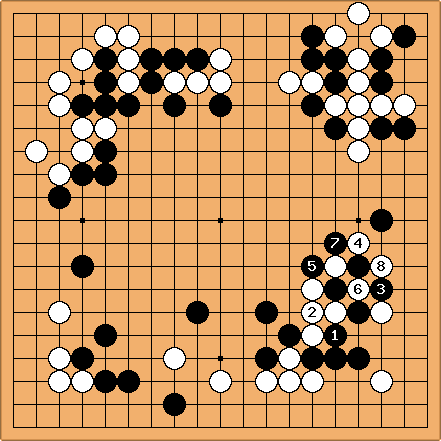 91 connects him up, and I make myself heavy at 2. 3 offers a ko, and I reach to far at 4. 5 should have been at 7. I capture at 6 and he doesn't defend! Gah! I take 8 to show him why he should have. The problem is now that I'm super ahead. he's got weaknesses all over the board. How do I pull back my strength and at least let him catch up?? Even if I hadn't butchered him in the corner, I'm still winning, and I need this game to be closer.

Teaching: Lateley as I have been studying several people have asked to be taught. Most notably in the past week, two people (young school students) wanted to learn. Being without internet access, I could not use sensei's to help me create a method, so here's what I came up with on my own. "The Corner Game" 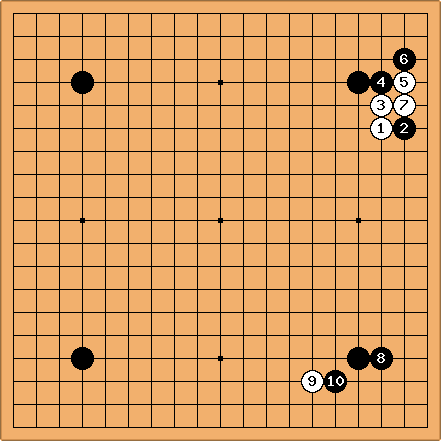 I gave the students four stones, and told them to defend the corner (don't let me take the corner). Play usually went as per the diagram(s). 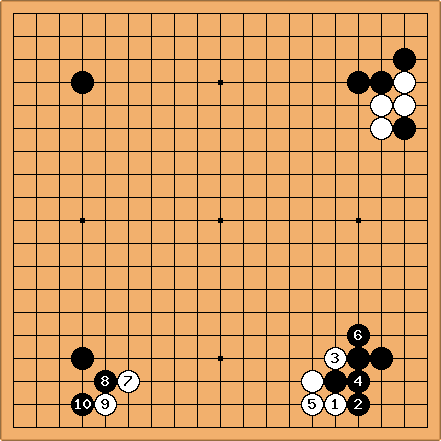 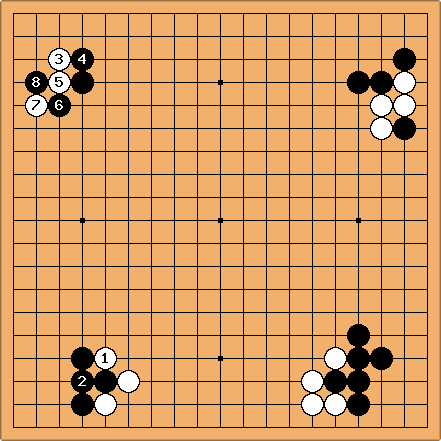 I made sure to show them the sansan invasion in the uppper corner, and they (without variation) made the cut. I didn't get into that beautiful pattern, but after this I went back to each corner and asked them what they got and what I got, and if it was fair. They seemed to get the idea that the outside could be worth things too.

Afterwards I played a nine stone game, making no special exertions, and I gave them one question to ask themselves: Where do I want space? One student's game went as follows (as far as I recorded it). 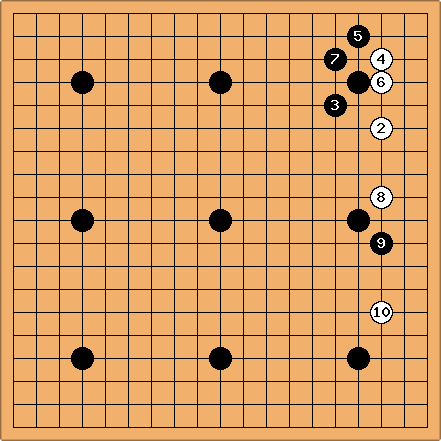 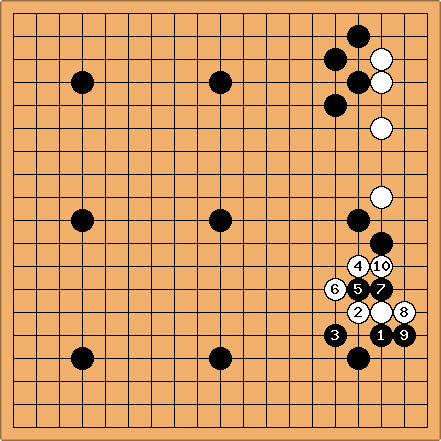 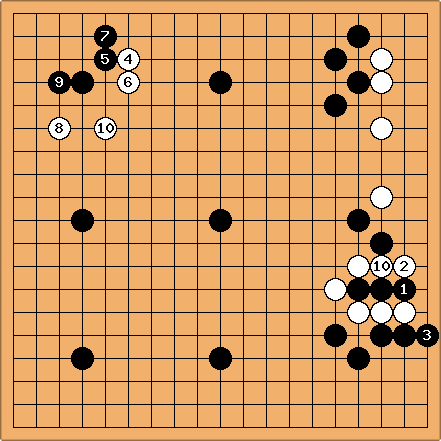 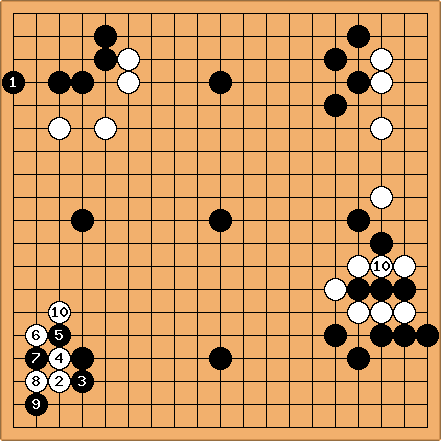 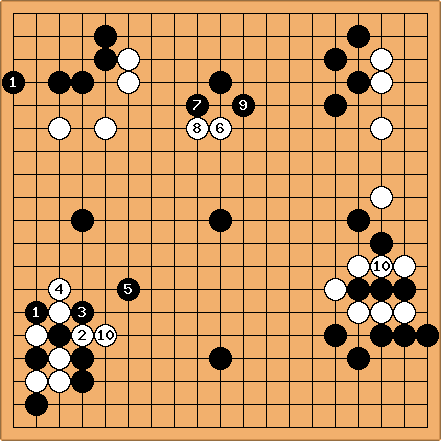 Not bad for his second game/lesson ever! Full list of questions that I gave them (based on what I could remember of the TrilogyofTrilogiesforBeginners: 1. What was my opponent's last move? (Do I need to answer it?) a. Where does it want space? (Is that space too big?) b. Did he punch me? --> Wrap Around c.Did he wrap around? --> Pull back