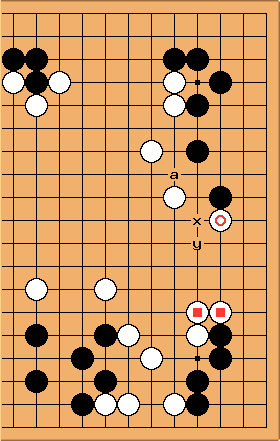 Waya praises the marked white stone, saying that "normally you would connect in response to the black's threat" (I presume at a) "but Hikaru decided that just responding wouldn't be enough".

Pasky (~20 kyu): However, Hikaru's move doesn't really make a lot of sense to my naive high-kyu mind: I would intuitively choose x or y instead (and probably miss a ;-) ). Given Hikaru's response, what would a good response to black's hane at x be? Any way I read it, it seems that white is giving up the territory in the middle of the right border unnecessarily...

(I'm not sure if the problem description is not ambiguous enough, perhaps it should explicitly mention securing the upper right? Also, it's not apparent that the discussed move was the last that happenned on the board, but I'm not sure if order of play matters significantly here. Feel free to improve the pages, please.)

AWA (12k): The marked stone has a dual purpose; it cut off black from extending to the side, and it locks in territory because of the supporting squared stones directly underneath it. Normally, if the squared stones were not there, white would be allowing black to obtain territory, most likely losing little or no stones. Here, if black cuts at x, then it can be neatly disposed of. Or at least my humble 12k reading tells me.