This is a RenGo. The teams average about 14k (EGF): 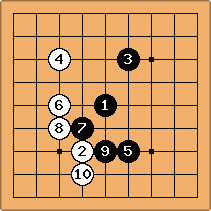 : I don't know anything better to do, really.

: made sense at the time

: White already looks to have the smaller side.

Alex: Actually, this is probably zokusuji (crude play). I can't really go into it while the game is in progress, because it would give you both hints at coming sequences, but remind me to bring it up later.

Migeru: That is why you are 3D and I am just 9K. I'll remind you when the dust settles in this area of the board.

: I believe this to be reasonably unagressive and safe. Not sure if I should have tried dropping down to the edge just yet or not

Alex: This is what I thought you might play, and the reason I said

is zokusuji. Pushing into a knight's move is almost never correct unless it is immediately followed by a cut. There are rare exceptions, of course.

MattHope: I see... Since the follow up of (in this case)

; too early for contact moves. Since you're playing Black with only 0.5 komi on such a small board, simple moves like

should be enough to win.

As for why Black's shape is so bad, there are two reasons: first, part of the reason the

. When that stone is already in place, that threat is absent, so the shape is not as good. Second, when White can give atari as she did in the game and there is a Black stone at

, it results in an empty triangle if Black connects. Of course, Black should tenuki instead of connecting, but that doesn't change the fact that the shape is bad - if you're forced to ignore an atari because connecting would give you terrible shape, your shape was probably terrible to begin with.

MattHope: I see, thank you for the analysis. I always worry on a 9x9 board against stronger opposition that an attempt at strategic play will leave such a tactical mess that ends up overwhelming any benefit due to the reduced size. Does play on a 9x9 board tend to over emphasise certain behaviours in weaker payers?

is good shape, but I think I know what Alex meant about zokusuji.

is fairly terrible shape with

is almost completely redundant. All Black has done in this sequence is fix White's weaknesses while strengthening himself comparatively little.

: Hopefully this is sensible and not wasting a chance elsewhere.

Migeru: I like it for white: it is a good dual-purpose move that both attacks and defends. 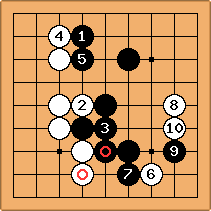 : Top or bottom, that is the question. I think this is bigger, but is the bottom more urgent?

MattHope I couldn't find the 30 point move to make it worth it APonnukiIsWorthThirtyPoints :)

Migeru The ponnuki page says "a good ponnuki is under-concentrated, not overconcentrated". Too many surrounding white stones.

Migeru IMHO it is sente.

: Time to get a bit more aggressive, I think.

: I don't think we can afford to let the invading group link up with the very solid group on the left. Not sure If I should have gone one to the left. I felt that reducing the liberties of the invading stone in return for shrinking the territory by 2 or 3 was a reasonable tradeoff given my lesser ability to 'see' the strength of the invasion

Migeru Playing one space to the left might have pre-empted

, but the best answer to

is probably playing on top (on the 3-3 point). By the way, going back to the previous diagram (moves 1-10), given that

is already on the 4th line from the right,

is too far to the left. Now you can see why.

is becoming more and more apparent.

: How much more aggressive? 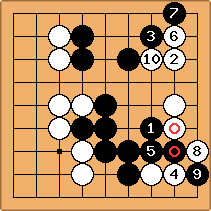 : hope the time spent thinking this through pays off :)

: I think up is the way to go (hopefully). I was expecting Ben to go up on his last turn.

MattHope: I think Ben was right with

since it was sente in that it required a response down there or we would have lost the SE corner for sure (I could of course be wrong). I did play through this line so here's where we find out if my analysis works...

BenH: I had played

intending it to be sente, but then later realised that me might have failed in the SE corner. But since it got a response, I'm happy enough.

: Both corners are just so inviting...

: I think white is not necessarily playing honestly.

Migeru: Ok, Matt, only you can save the day now.

: This saves the SE corner but I can't play through the top in my head. Previously you said that on the second row you needed wall of 7 to live, and 6 depended on other stones. I'm hoping the arrangement at the top prevents this

: It's all feeling pretty doomed. 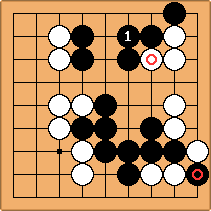 BenH: I don't think there's any way we can trick Matt into anything stupid enough to let us win at this point, so we might as well resign.

ppadams: Agree. New game on a bigger board maybe.