English of the Definition of Virtual-Force

Could "that something" be replaced with "that condition", "that position", "that state" or some such term in the recursive definition? I find these options more readable and idiomatic than "something". --Hyperpape

RobertJasiek: "something" is the historical choice of a word, see the

For a position, a player can force something (a condition, state, property (you may add something here), hereafter abbreviated "condition") if that player can make a legal move that reaches a second position that satisfies one of the following:

Let φ be a property of a position. Then for a position p, a player can force φ if that player can make a legal move that reaches a second position q such that:

I actually prefer the second.

RobertJasiek: I do not verify right now whether your procedure list maps the definition. When I find time for a formal J2003 version, then I can make you happier...

Hyperpape: Unless I've made a terrible error, I've just substituted φ for "that something", "property" for "something" in general, and added p, q and r as names of the positions.

Discussion of the English

Without restricting and unrestricting extras, the sentence's core is: "A player can virtual-force something if he can force the something."

Here "while" means during each moment of the player's attempt to force.

This exception is an unrestriction of the core because it provides the player with extra rights.

The exception itself is in turn restricted by a subclause though: "unless that ko-capture was preceded by the player's ko-capture on a different ko". This is when the "always" of the exception's main clause does not apply.

What do exception and subclause exception of the exception mean in effect? There are two cases: 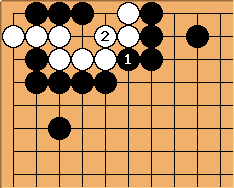 . Note that Black cannot force seki if White has a different goal than "not die", because in that case white would play elsewhere with

, and there would not be seki.

RobertJasiek: I have not thought through the "either...or" or "or" logic completely yet. What if the opponent cannot even force B as a task for itself? This lets me think that "or" is correct rather than "either...or". Also compare the "or" construction in the

definition of semi-stable ko. I am not really convinced in general yet that the "or" construction equals the answer-force usage. I have found it easier to invent answer-force than to prove equivalence of the two constructions. "either...or" introduces undesired side-effects though.

Herman: I had assumed that answer-force was mutually exclusive with force, i.e that if a player can answer-force something, it is assumed he cannot force the same thing, but I see that that is not necessarily the case. Can you clarify? Example:

RobertJasiek: Consider a player's two-eye-formation covering the whole board. The player can force having a two-eye-formation. Besides the player can answer-force having a two-eye-formation (for whichever force-objective the opponent might have). So force and answer-force are not mutually exclusive. - As to your example's question, an answer-strategy does not have any parameter-like objective. Also a strategy does not have any such objective. strategy and answer-strategy are a definition logic level lower than the terms force and answer-force, which do use such objectives. I.e., you should formulate your question differently as "[...] White can force to kill the black group in the upper right". Now we can study whether indeed White (moving second) can force this. White cannot. What you really want to know is whether Black can answer-force death of the white string in the upper left if White forces death of the black upper right string. You will find out by applying the definitions carefully, I hope.

Herman: Ok, thanks, that clarifies a lot. Another question, then. In your paper you give the definition:

Is it required that "the player's first move" be compatible with one of the player's strategies? (My intuition would say yes, but the definition does seem to require it).

unkx80: I'm quite sleepy now, but as I wade through this discussion, I can't help to question something. Earlier you asked "What if the opponent cannot even force B as a task for itself?" But I quote your definition: "A player can answer-force A if the opponent moving second uses an answer-strategy that - regardless of the player's first move - does force B and if there is at least one strategy of the player so that each move-sequence that is compatible with the player's strategy and answer-compatible with the opponent's answer-strategy fulfils A." And then "A player does force something if he uses a strategy of his so that each compatible move-sequence fulfils that something." I take it to mean that your definition says that the opponent has a (answer-)strategy that allows him to always force B?

RobertJasiek: Thanks for being less sleepy than me today:) Yes, as you read it I have also applied it to my examples, IIRC.

unkx80: By the way, may I suggest rewording that definition as follows:

unkx80: The structure "X if Y" means that "X" is being defined, and its meaning is "Y". Now, you are defining the term "can answer-force A", but in the context that "opponent uses an answer-strategy that does force B". Therefore that "X" should be the context plus the term. How does it read like, "something-being-defined if it belongs to some context and if it together with its context has this meaning", versus "in some context, something-being-defined if it has this meaning"?

RobertJasiek: Without doubt, it is possible to write the definition more in maths fashion:) "For some player P, for some A, for some B, there exists strategy S, there exists answer-strategy T ...blahblah..." I suggest you write down the maths version, then we have the best idea how to express it in English with the least remaining ambiguity.