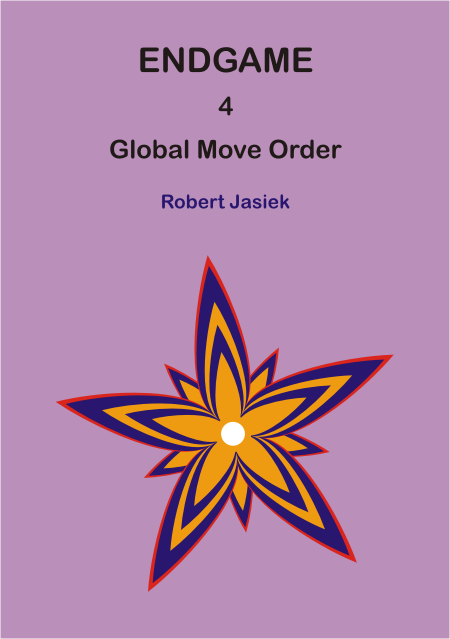 Endgame 4 - Global Move Order is a book by Robert Jasiek about the correct global order of moves, being volume 4 of a series on the endgame.

Endgame 4 - Global Move Order is a comprehensive study of the global endgame and invents most of the theory. The book replaces informal guesses by correct decisions for the order of moves, the timing and duration of playing locally versus playing elsewhere. The theory explains and solves many situations by always comparing the right values.

Previously, it has been obvious to play simple gotes without follow-ups in order of their decreasing move values. I have only seen one professional player (O Meien) explaining the value of starting in an environment and error margin in chapter 4. Fragments of the theory appeared in public live research by Bill Spight and me. Otherwise, almost all of the revolutionary theory of global endgame evaluation in this book is newly invented! Endgame 4 - Global Move Order fills this huge gap in go theory. It achieves for the early and late endgame before the microendgame what Mathematical Go Endgames has achieved for the microendgame.

The book presents counter-examples refuting the popular advice of always a) seeking tedomari (the last large move) or b) simply playing local endgames with or without follow-ups in their order of decreasing move values. Such informal go theory has neglected that correct global move decisions can depend on the local endgame and the environment, move value and follow-up move value, or resulting counts. Endgame 4 - Global Move Order enables these decisions by comparing the right values in exact conditions.

Despite the novelty of the theory, the mathematical theorems proved in Volume 5 already establish its absolute truth. During the late endgame, we can stop tactical reading on reaching a generally solved class of positions. In other positions, the theory greatly simplifies reading. During the early endgame, the timing approximations are the best we have. The theory also applies during the opening or middle game whenever their additional strategic concepts, such as influence and fights, are irrelevant.

For the considered local endgames, we decide whether to play locally or in the environment. Sometimes both choices are right. We learn the first and last moments of playing in sente or reverse sente in every particular local endgame. We also learn exactly when to interrupt long successive local play and continue in the environment.

The decisions differ for the early and late endgame. They depend on the starting player, types of local endgames, their follow-ups, their calculated local values and the temperature. The early endgame is too complex to be solved completely while, in principle, we might solve the late endgame by tactical reading given much time. Instead of Black versus White, attacker versus defender, or sente player versus reverse sente player, it is often useful to distinguish the creator, for whom a follow-up or options are available, from the preventer, for whom they are unavailable. There are local gotes, ambiguous local endgames, local sentes, and local endgames with alternative gote and sente options. A non-iterative local endgame can have one or two simple follow-ups. We need some of these values: move value, follow-up move value, gain of a move, net profit of a sequence, its resulting count. The temperature can be low, medium or high.

Endgame 4 - Global Move Order states the correct decisions for all basic cases with these aspects for one local endgame with simple follow-ups in an environment. It also describes some decisions among several local endgames or, during the late endgame, local endgames with iterative follow-ups. During the early endgame, the latter do not have any explicit solution but we may apply the good approximations to them, too.

The book goes far beyond inventing just some new theory. Instead, the theory is already fully developed with different methods, such as comparing two well chosen test sequences, comparing counts, comparing net profits or applying a principle. Since Volume 5 proves their equivalence, everybody can choose his preferred method. Although such decision-making is very much faster than tactical reading, the theory offers further means of acceleration.

Examples illustrate every case. Finding the rarest examples took up to four days each. The book also studies how tiny changes greatly affect the outcome and decisions even in basic examples. Furthermore, the book explains various aspects of strategy. Besides, there is a brief history of endgame evaluation.

The book contains structured general explanations, principles, a few detailed reference examples, many commented examples and an index. Calculations often appear with consistently used symbols, such as M for move value, and actual numbers. Since this book emphasises global decisions, local move values are often simply stated so that it is the reader's exercise to verify them for a local endgame without or with simple follow-ups. Font attributes assist reading of the text. Diagrams mark the counted territories and show move values.

The reader can easily choose chapters, sections or paragraphs according to the level of difficulty (basic, intermediate, advanced, expert) denoted by diamond symbols. Asterisks indicate many principles as either mathematically proved truths or obviously correct.

What the Book Is Not

Although the theory applies to the whole board, almost all examples simplify the global environment as a representative selection of simple gotes without follow-ups, whose shapes ease understanding of the theory. Except for 10 problems testing understanding of the central, basic contents and their answers, this is not a problem book. Instead of training tactical reading or rarely needed tesujis, the taught decision-making depends on value considerations. Since the book only briefly summarises the basics and local evaluation but afterwards presumes their fluent knowledge, Volumes 2 and 3 can assist its reader. The book does not explain evaluation of kos other than basic endgame kos. Except for a few expert hints, theorems and mathematical proofs only appear in Volume 5. School mathematics is sufficient because the book avoids all thermographs, cooling and infinitesimals. The book contains such an overwhelming amount of theory that the rank improvement after reading the book once is declared as average; it may be necessary to read the book several times to learn everything.

If you prefer problems or light entertainment, this book is not for you. Read Endgame 4 - Global Move Order to learn much powerful theory including new, well researched inventions of global endgame evaluation and decisions.

The table of contents is available

at the authors site.