This page appears to describe an abandoned project, game, etc..

Ok My idea is to make a complete walkthrough to go, from 30k to 1d.

This page NEEDS data, if you are interested in helping, please make a go journal and send it to me. It should include everything you do relating to go and when, including games, studying, problems and when you ranked up.

While I still believe this page to be important, I no longer have the time to own it or improve it. Please help me with this page. I think the idea could definitely expose western players to a number of basics they miss by not being in a culture where go is ingrained.
This page is arranged by rank. In go, your rank allows you to play a nearly equal game with people stronger than you, but i'll explain that later. The ranking system is divided into kyu and dan with kyu being the weaker set. The weakest player on the face of the Earth, even one who doesn't know the rules is considered 30 kyu, often abbreviated 30k. Like in golf, the lower the number, the better, until you reach 1k, which is fairly strong. After 1 kyu, the ranks ascend into dan rankings starting with 1 dan, often abbreviated 1d. As you get stronger from there, the numbers get higher, all the way to 9. 9d is amazingly strong and people with that rank have been studying intensely for years.

First things. Go is played by two players on a square grid of intersecting lines, usually 19 vertical, 19 horizontal. One player is assigned black stones, the other white. Players take turns placing black and white stones on the intersections. Once a stone is placed it can't be moved, but sometimes it can be removed. Those darker intersections are called Star Points, and they are for navigation. They really aren't special. Turns alternate, black goes first, white second, and so on. 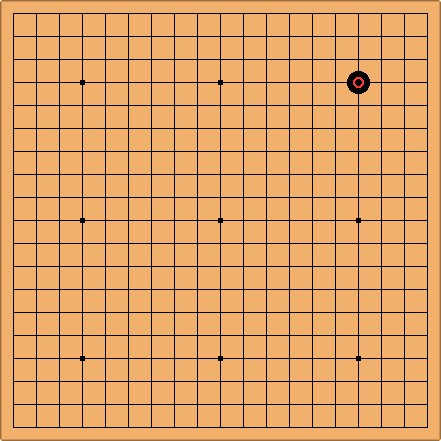 The point of the game is to maximize your territory, the number of intersections(points) behind your stones. You get one point for each point, get it? Points not behind anyones stones are called dame, and aren't counted. 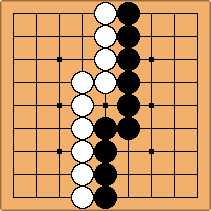 It's hard to know where to place your stones at first because you can place a stone almost anywhere. One way to add to your territory is capturing. To capture, you need to surround a stone. The surrounded stone is then removed from the board and put in your prisoners. Prisoners are worth one point each. %% How to Capture 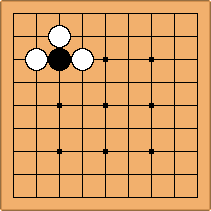 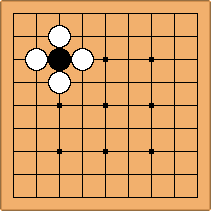 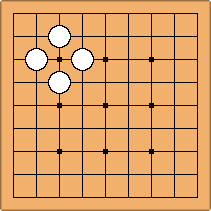 It's time to learn some basic Tesuji.