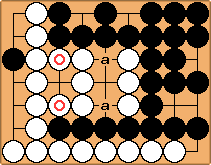 Herman: Correct me if I'm wrong, but isn't this a better defence for white? Now black's invasion has become pointless, and white gets 7 points, winning by 2. (Black must play at least one of the a marked points to prevent another point for white there)

You're right! Even more reason for B not to play this line. SiouxDenim 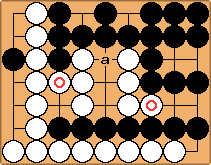 Herman: Shouldn't white's second half move be at a? That way, white can live and will not lose any stones... 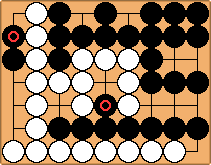 W only has two eyes. 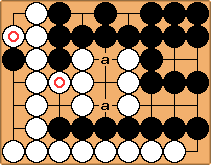 Herman: Whoops, missed that :)
So how about this then? White will either make three eyes on the left, or get both moves a and get an eye there...

It's not easy this problem making malarky! I added the 3 White stones on the right to provide some threats, they weren't supposed to be an option for an eye :( I can't find an easy fix for the problem either. SiouxDenim 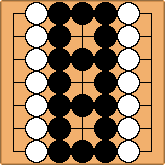 This is about the simplest problem I can think of. B to kill some W stones.

SiouxDenim: Let's play it out and see. 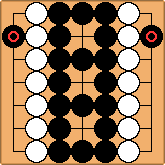 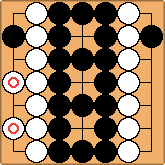 White can choose to make 3 eyes for one group 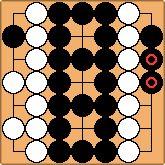 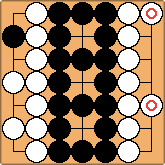 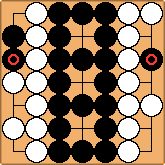 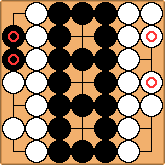 Now Black has a parity problem. The group on the right needs 3 stones playing within it, with a single stone played on the first move. Black has no sensible places to play the other half of the move. When I first analysed this, I assumed that Black could pass for half of a move. The rules as currently written don't make this clear. 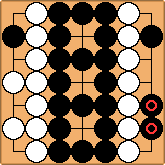 Black can also attack the group on the right like this. 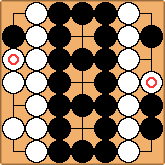 Alternatively, White can try to save both groups directly, by placing one stone on each side. Again, the aim is to get 3 eyes so a group can live. 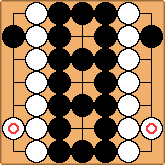 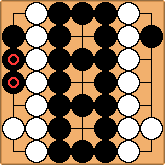 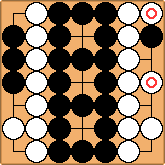 B has a parity problem again.

I can see good arguments either way for allowing and disallowing half-pass moves; it'll only matter in games with very little territory. I propose that a pass is for a whole move. 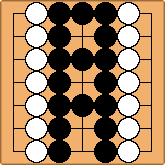 I think that the original problem is unambiguous if B has another liberty in the middle group.