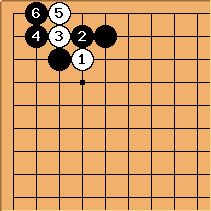 The two black stones are directly connected because the opponent cannot cut apart them. If White tried, some of his cutting stones would be captured and Black would prove that he can maintain the connection.