Cut beyond the edge

This page is in need of attention.
Reason: The author has discontinued the discussion

can be extrapolated to 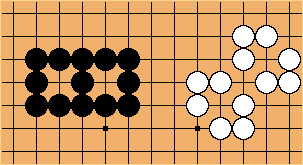 What the heck is this???

Unlike at a borderless goban, the points at the edges of a common go board are quite specific ones. They have one (or two, at the corner) liberties less than other points. Therefore, at or near the border some things easily can happen wich hardly ever occur in the middle of the board, and vice versa.

Hmm, true. But, what's this page about?

Can you imagine to virtually continue a particular position beyond the edge of the board so, that the position's properties inside the board aren't changed? In which cases do you think is this possible, in wich it isn't?

Well, I suppose there should be (actually more than) one way to construct a consistent game environment frame around every 19x19 board position. This frame game position might have to change after almost every move, but, considering the whole sequence, it would allow to embed common go to an infinite board. --rubilia

chipuni: Actually, you can represent the edge of the board as having pieces the same color as the piece they're horizontally or vertically next to, so your real, corresponding live form would look something like: 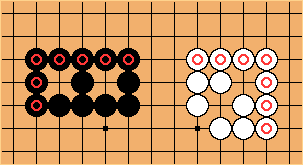 The circled points represent the edge. Of course, these new points don't themselves have liberties, so a more correct representation would be:

where the circled points stretch out to infinity.

Or am I misunderstanding you?