Once upon a time I played with quite a strong player (5d in Europe). It was five-stone handicap game and I lost. Here is a position from that game 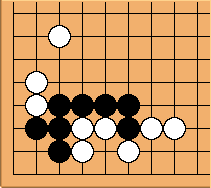 I don't remember the whole board position, but at some point I became very much afraid that I would not be able to build the second eye in the center. Lack of confidence is one of the factors that makes us panic when playing against stronger players. We agree to give in a little bit just to be alive. And then we give in somewhere else and finally the game is lost.

Returning to this position. I knew that I had a tesuji. It is either life or ko. If it is life then it is life in gote, but I was ready to give in here :(. 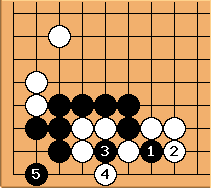 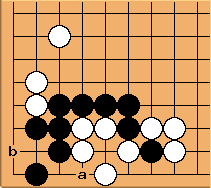 My opponent, smiled, exclaimed: "What is this? Chemistry and life?", played a, I replied b and the game went on.

I have to provide some explanation. The word "chemistry" is quite often used as a substitution to "trickery" in our language, at the same time "Chemistry and life" was the title of a popular science magazine. It was a good joke.

Later, when we analyzed the game, my opponent said that though the tesuji was cool, he did not like it. Why? "Because, you built two eyes for my group, too."

It is great to play with a strong player. A little hint like this gives one a lot to think about. Of course, sometimes I am forced to build eyes for my opponent, but how I hate it! 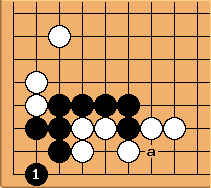 Alain: In the given position, there is no need to sacrifice a stone at a.

immediately is better. If White wants to attack the black group she will have to protect the cutting point at a anyway. This is a good illustration of the principle "Don't play unnecessary moves?". 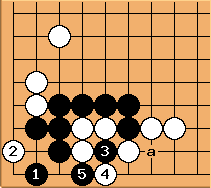 If White tries to resist, the throw-in tesuji of

creates a big ko. (If White connects, the ko becomes bigger after Black plays at a.)

It is not reasonable for White to play

since Black has many local ko threats to make two eyes for his group. A more subtle way of playing would be to protect the cut at a. 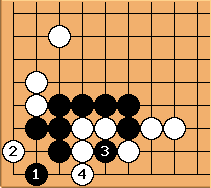 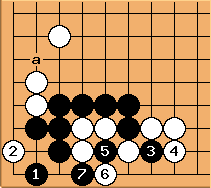 Alain : You are right, I overlooked the possibility of White resisting harder in the "If White tries to resist" variation. If White plays at

, Black has to play at

Anyway, this doesn't change the conclusion that Black should play

. Playing like this, you give White the "chance" to play

which is an unreasonable move. After Black wins the ko (which is very likely since he has a lot oflocal threats starting with a for instance),

will obviously become a bad move.

Locally, the correct answer to

would be to protect the cutting point at 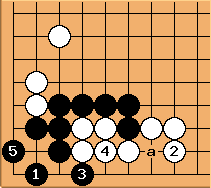 This seems to be the correct sequence, locally, if Black wants to make two eyes here.

This is at least two points better than cutting immediately at a (comparison with the reasonable sequence when White doesn't play the ko). 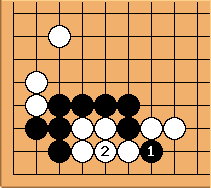 Taking a purely local standpoint, how about playing at 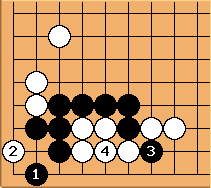 In a similar fashion, I don't think Black has a chance to live by making two eyes or a ko in the corner alone. 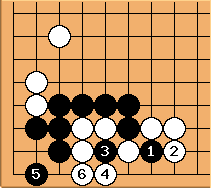 However, from a global perspective, I will still say that this sequence for White is still the best.

Correct. The tesuji does not work. Sorry for the mistake, though the moral of a little story was in not allowing your opponent two eyes, even if you don't see how you can use that in the future.

It is not difficult to change the position in order to make the tesuji work. 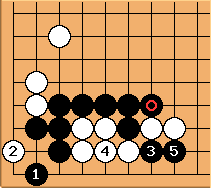 there, the tesuji works.