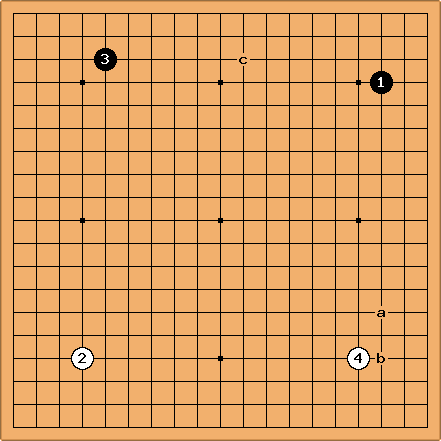 Lately I've been trying this out a lot and it has been working really well. It seems to work particularly well against players who don't think through the opening really well. A lot of the time people first of all play nirensei automatically. This seems to be particularly unsuited for this opening because it allows me an approach at a. This seems like the perfect direction to approach from, especially if the opponent absentmindedly extends like in the next diagram. At b seems a much better answer to this fuseki, because it leaves Black without as nice an approach move. Another nice feature is that c seems a perfectly fine answer to a white approach, either to Black's komoku or to mokuhazushi, leaving Black in good shape up top. 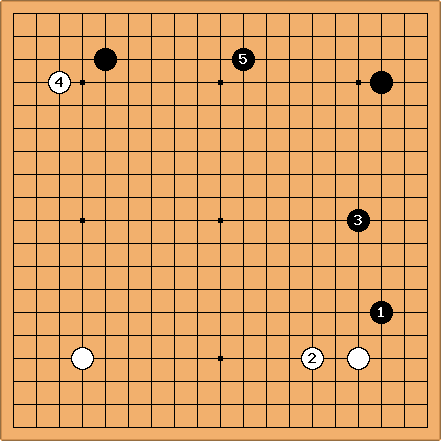 I've found that _many_ players respond to this opening in this fashion. First of all, they always play nirensei without regard to the rest of the board. Next, they avoid the complications of a pincer automatically by extending, and then automatically approach the mokuhazushi from the 3-4 point. Usually I end up dominating the rest of the game after this point. Maybe you could almost call this a "trick" fuseki?

JamesA: Hi BlueWyvern, I've been looking at your fuseki pattern with GoGod and Kombilo and found just 11 pro games where Black used this method. Of those games, 6 were won by Black and 5 by White.

In three games, Black's next move was a. White won two of those three games, though. The most popular next move for Black was b, and Black won three out of four games played that way.

It seems, then, that for White to play nirensei is not necessarily bad, indeed Rin Kaiho, Cho Chikun, Cho Hun-hyeon and Yi Ch'ang-ho are some of the pros who have played White in this position. 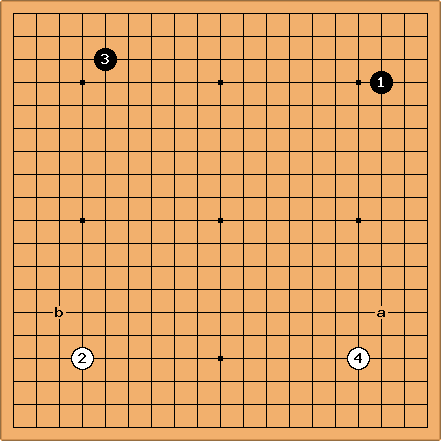 As for the marked stone being an 'absentminded' play - well, it was played by Cho Hun-hyeon in 1995 and although he lost, he was playing Yi Ch'ang-ho so it may not be because the move was bad. 9 dans don't tend to play absentmindedly. That game continued up to 10 and a big fight started. 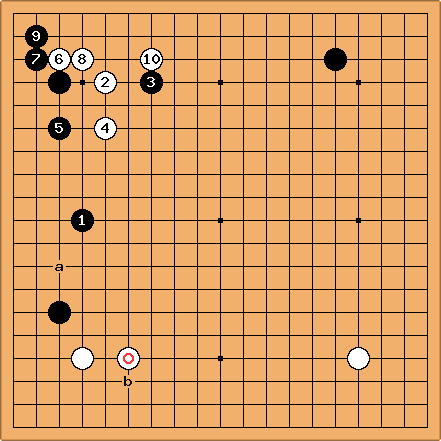 Although the marked play above is not good at making territory, it threatens the black stones above more than a play at b. For instance, an invasion at a may be possible later. The marked stone and the stone two lines to the left of it are a strong and influential way to play.

I think that maybe the reason you have such success with this fuseki is that you have thought about it a lot, and is more indicative of your strength with a fuseki you like, rather than the strength of the fuseki itself. For instance, I like playing nirensei with Black a lot more than the Chinese, and my success rate is much higher with nirensei. No one could argue that the Chinese is a bad opening for Black!

Sazn: There is a name for that type of poseok, I forgot its name. It's not original, it's pretty old (no offense). The Korean name for this poseok is Byeol-Ryeol-Hyeong-Po-Seok.