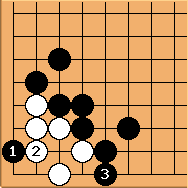 is the correct way to attack. 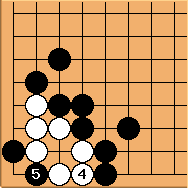 is the best play for both players, with White taking the ko first.

Refer to Tripod Group with Extra Leg for more details. 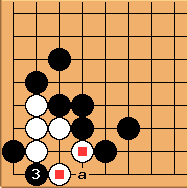 Paul Pogonyshev: this move looks fine. It threatens the

lavalyn: Not really. See below.

Paul Pogonyshev: Yes, it's not as fine as it looked :) 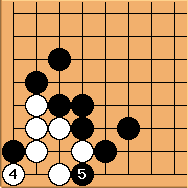 If White captures, Black responds with 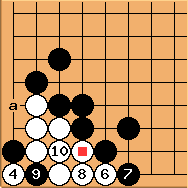 and the second eye. So she has to play at

. White has no option other than to connect with

and then Black captures ko with

, forcing White to connect with

. It's over now: Black places a stone at a, killing White. 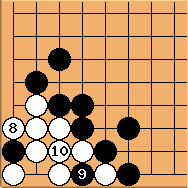 in the above dagram is OK; but

(shown below) is correct too.

lavalyn claims the solution above fails: 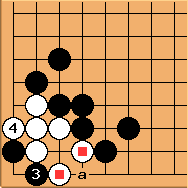 Delaying the capture but preventing Black from playing in the corner - no suicide allowed. 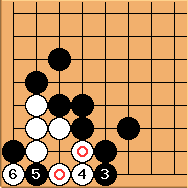 is necessary to reduce White's liberties. Now when the ko is played at

, White must take - unlike the previous diagram.

Paul Pogonyshev: it's night time and I am tired, but as far as I can see, White is alive with three eyes here. What's wrong?

stones are in atari. But if White fills against the atari, Black takes the corner - the resulting three-space big eye is dead. 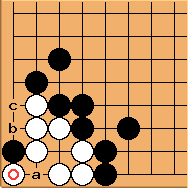 Paul Pogonyshev: This is what I believe is on the board after the sixth move. Black can't capture at a (ko). Next move White captures at b, or if Black has played there, at c and lives with three eyes. Or not?

unkx80: Please see Ko fight Example on what goes on during a ko.

Paul Pogonyshev: OK, I knew what ko is ;) I merely misunderstood the task, thinking it was to kill White. 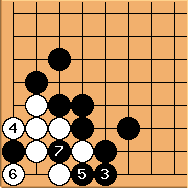 This looks like it also works for ko. However, since White captures first in the previous diagram, White will prefer playing

(try to get first capture in a ko).

For more information, reference the Tripod Group with Extra Leg.